In Croatian LARP so far, Jaska LARPs have been the biggest brand name. Named after the nearby town of Jastrebarsko (or Jaska, as it's commonly called), two a year, highest-budget Croatian LARPs with also the longest duration of four days (apart from last year's Jaska 9 which was different). This year, Jaska will humbly handle the crown to the big national event in July, which will be organized instead of regular Jaska and with other organizers joining the party.

Nevertheless, May's Jaska is and will remain Jaska. And this year it just became the place for Ognjeni Mač association to showcase the best that we can do by ourselves. As it was the last year, most of the tasks about making this Jaska great was on OzOI (Odbor za Organizaciju Igre - Board for Game Organization), who are elected yearly to GM all the Ognjeni Mač events. 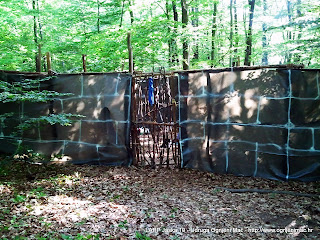 Attendance on Jaska 10 was slightly lower compared to last year. 30 players in total made this event smaller than last year's Jaska events, but still larger than most previous Jaska LARPs and indeed larger than most LARPs in Croatia. It did feel smaller than usual because most players made one big camp around the new tavern and fortress that were made from tarps... actually looking better and more solid than what we had previous years. Besides the "main camp", there was a "non-human" camp and NPC camp (which was better done than the previous years... it was interactive this time).


I arrived the day later, on Friday, missing some early action. I actually arrived on the event with the idea of starting my own in-character barbershop offering either real or make-believe shaves. The first day it was already too late (night would fall soon), so my barbershop was open only on Saturday. I got only one customer, one of the organizers - he took a real shave and was satisfied, so hopefully the business will go on :) But I'm running ahead of myself. 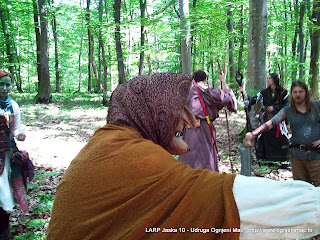 The main quest included plenty of shades running around, a wraith (didn't get a good photo of them since it was running dark), and restoration of balance in the nature - a continuation of the previous LARPs and the story that has been building over several Maksimir LARPs, Sljeme 2, and the feast the weekend before. As expected. The story ended in an event many called anti-climactic, but personally I thought it was a brilliant move. Something unexpected happened, and the majority of the final battle was avoided to the surprize of most. I'll still call it creative and brilliant. 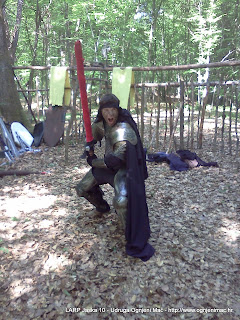 Plenty of players received their own care and attention, and their own personal quests - or at least elements of the same. All quests were logical, and there were no loose ends. There were quests including alive stone roots, a mad druid and his wolf, a fortune-telling old hag, sun-warriors, a former paladin turned to evil, an ancient vampire, a troll female in heat (played by yours truly... don't ask), and many more I probably missed. 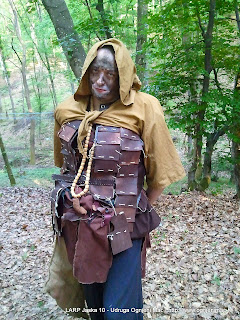 Jaska often holds the reputation of the most brutal, intensive, night-action, sleep-deprivating LARP with high character mortality, but great rewards and opportunities - and rightly so. However, this was toned down this year a lot - while the before mentioned was still more true for Jaska than for other Croatian LARPs, it was significantly toned down. This was certainly one of the most enjoyable Jaska LARPs I've been on.

Looking forward to the Terra Nova LARP (in 10 days, better get ready) and Istočna Anarhija (2 weeks after Terra Nova). Perhaps I'll even visit an Austrian larp in the weekend between. I'll see. Until next time!