In the Steampunk larp series Para pokreće svijet by Sven Nemet, World War 1 started over a decade too early, mostly due to the act of several random assholes *whistles innocently*.

So, considering there were several "spin off" events for Para pokreće svijet - one of them which involved us actually climbing in the indoor rock climbing gym, and another which involved a chase in the snow-covered mountains - this was another such spin-off event, meant to add depth to the larp world while being different to the usual social larping style. It would involve a few people trying to move the plotline of the larp in new directions by controlling the armies in the world which already went far away from its' historical inspirations. 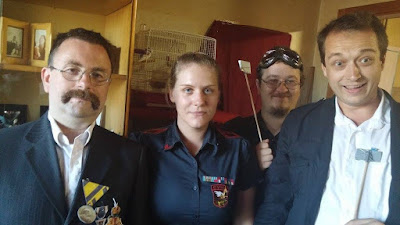 Our larp location was an apartment of one of our players. In total there were 9 of us: 4 per side, plus one of the GMs. As my usual character on the Steampunk larp was a French ambassador who turned out to become a minister of war, I played that character while everyone else played another character, usually a general of their armies.

The battles themselves were decided by a board game. While not the first time it happened, this time it was really heavily focused on the board game element. And the night seemed very board game-ish. There was relatively little role-playing, while most of us focused on the board game element which played like a combination of Risk, Battleship and a few unique twists. We didn't know enemy state of the board, and they didn't know ours so there was a lot of guesswork and outmaneuvering. Heck, we didn't know the rules itself - as GM asked us for a description of what we're doing, and then ended up resolving it and running from one group of player to another.

And then we had some quick minigames, like which team could build most battleships and automatons... out of LEGO bricks.

The other team - separated from us by a wall which was not completely closed - was quicker than us at this. Another "game" was getting ourselves some allies from the countries not currently represented - which involved actually calling the players who weren't there. I have no idea whether GM notified them in advance, but it worked fairly well. 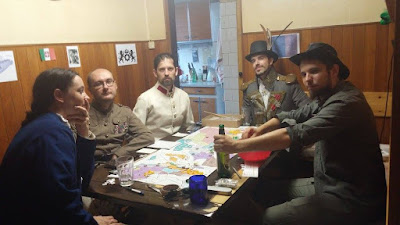 The actual playing of war took a long time, and turns lasted a while. In the end, my team made major advances in Europe, and net losses in Africa.

Overall, the play was quite fun, despite having few elements normally associated with larps. It was unique "hell why not, let's do it and see what happens" event which probably won't repeat itself.

After the event we had a quite fun afterparty, and discussion about what happens next. But when unusual things like this one happen, I'm quite sure it won't be stale or more of the same.