Vampire Night Chronicles - how the larp got started

Unlike most larps which have been designed with the top-down approach, this one has been designed from the bottoms up. A group of players basically agreed and voted on several key design elements, and I was asked to be a part of the organizer/storyteller team. I said yes. And truth be told, at first I was more than a little cautious about it due to some of my previous bad experiences. But now I'm very very glad that I said yes.

First of all, some design elements we agreed upon: it will be a setting in which it will be possible to play characters from (almost) all the vampire factions of the classic World of Darkness setting, including regular interaction of Camarilla, Anarch and Sabbat. Organizers are a committee and we'd do our best to give everyone their chances to shine IC, and to create a welcoming environment OOC. It would be set in modern-time Zagreb. All characters will start as neonates. And we'd use By Night Studios rules.

The intro event was played on October 3rd, in Vinyl bar which is in the center of Zagreb. After a lot of planned, careful preparation, some hectic last-minute changes and plenty of on-spot improvisation, the launch of the first event turned out to be maybe a bit clumsy, but great fun. Organizers played characters which were facilitators to get various factions started in larp. After a shaky start and some confusion, characters got themselves sorted in factions, established a hierarchy, and took power in domains which consisted of various parts of the city.

A lot of players who ended up in these positions of power never played these positions before, so it was a new experience for many. These large events were planned to take place once a month - however, besides them we would have smaller events, played under a masquerade, without vampire make-up or elaborate costumes, and they would take place every two weeks. 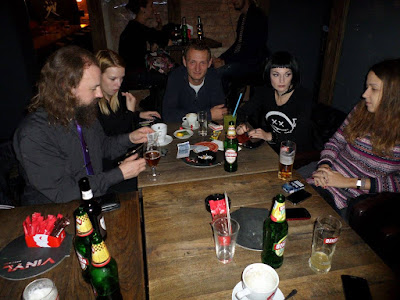 Two such events (appropriately named Masquerade) took place so far. A social night, with IC part and some role-playing.

The first such event - on October 9 - was a large one, with a lot of people the majority of whom were players of Camarilla characters. Anarchs were present, and others were outnumbered. However, the role-play on it was quite tame as player characters were still basically introducing themselves to each other.

The second small event - on October 21 - was quite tense. With a small, but relatively balanced number of Camarilla, Anarch and Sabbat characters, a conflict broke out between Camarilla and Sabbat when a pack priest almost broke the Masquerade in Elysium, and this act almost led to open warfare between the two domains. 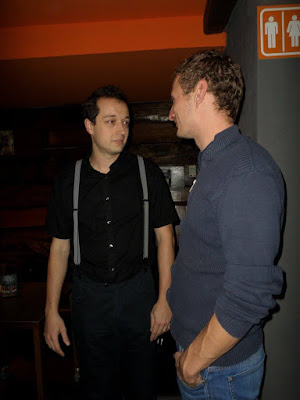 The second large event - numbered 1, because first one was actually an intro event - was played on November 7, and started with this conflict as premise. There were fewer players than on the first event, but this was quickly forgotten due to intensity of play.

After a bit of politicking, I switched to a secondary character I played for the rest of the larp - a mortal brother of the Camarilla Seneschal who tracked her down to a vampire meeting, and found himself deeply in the den of vampires...

Everyone sprang into action, and it was interesting to see how everyone dealt with it. Since everyone played neonate vampires, every character was reasonably expected to be still close to their mortality and their mortal connections, and this was still visible in their actions. Fear, bloodthirstiness, fleeting human emotions, opportunity and desire for protection led to what happened next. I ended up fed upon and ghouled, and the Seneschal lost her status... but gained a ghoul instead. That scene was quite awesome and memorable to play, and I'm thankful to other players for playing it so well.

The plotline switched to dealing with a certain Sabbat character who misbehaved on an Elysium. I went to switch back to my regular character on that larp - a Tremere regent, which I also find an interesting character to play - but it was too late, and it was time to close the larp. 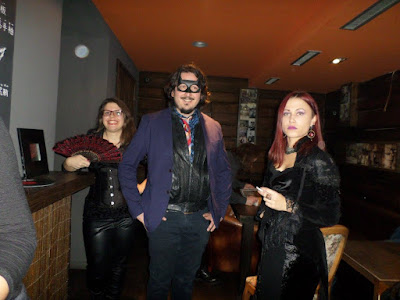 So, after two major and two minor events this larp is considered to have started. Training wheels are off and all its' infrastructure is in place now. This includes:

as well as all the infrastructure needed to start and run the larp.

Note: the contents of the above Vampire links are in Croatian, but international players are also welcome to Vampire Night Chronicles. If you're interested in joining, be sure to check out the above sites.