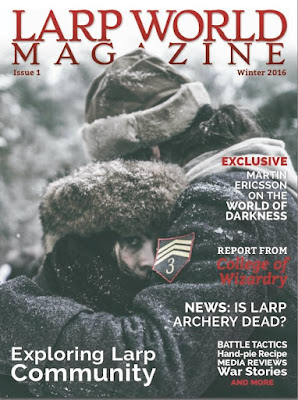 A commercial larp publication? I was intrigued from the first moment when I heard about it. The question, of course, is whether it justifies the $5 fee. I don't think I bought a magazine in over 15 years. With the growth of online portals - deriving their revenue mainly from advertising - I just found a lot of info available online for free in the main area of my interest at the time, which were computer games.

However, at that time finding decent info about larping online has been almost impossible. Even these days, when the situation is better than it has ever been before, larping is not only undocumented but also very context-dependent. Larpers might find a publication written for another larping scene difficult to apply to their own situation, because of different goals, issues, customs, player base, legal situation and much more.

It's no surprise that - being US based - Larp World Magazine is US-centric. It's published by Joseph Valenti (the owner of NERO), and edited by Aaron Vanek - some of the most well-known people in US larp. However, LWM remains highly aware of the international scene - especially larps highly visible to English-speaking audience, such as the Nordic and progressive scene. You can get your digital copy here. My review of the magazine follows.

In the beginning of the magazine, there are a few ads, news, short articles about some interesting projects and some US-specific legal stuff. The ongoing legal battle of larping.org and Archery Tag about the sale of larp arrows, cosplay and copyright law, etc.

The first major part of the magazine is called "Up Your Game". It consists of three articles:


Second major part of the magazine is "Features". Longer and in my opinion very interesting articles.

This is followed by a short larp glossary, and an interesting "War Stories" method of what to do during low intensity of a larp. And the magazine ends, at 73 pages total.

Four digital issues a year are planned, and also one in print. Digital format works well for this magazine, because in these articles there are a lot of links leading to websites and resources where you can find more info.

Personally, I like the fact that it has something for all sorts of larpers - new players, old players, organizers, traditional, progressive etc., which is something very few publications manage to do.

Larp World Magazine had some initial distribution and layout issues, but they have been solved and it's available on DriveThruRPG.