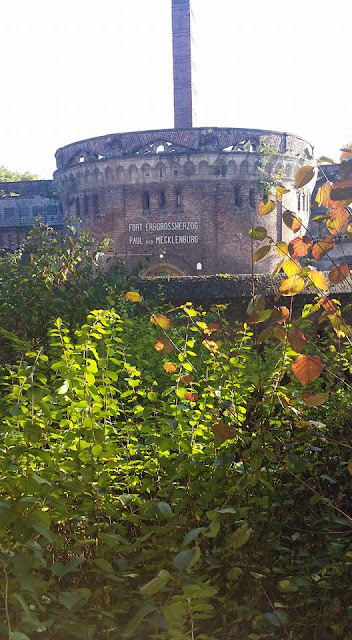 I've larped in Germany before, three times on ConQuest and twice on Drachenfest. These are the biggest larps in the world, arguably very different from smaller larps that most people are used to. Ever since my first time there, I've been hearing about Katakomben - a larp tavern in Cologne (or Köln, for those of you using the German name of the city). So I decided to visit the Halloween event they had.

Katakomben is organized as a monthly larp event, and it's played in a fort on the outskirts of the old city, close to the South Bridge over Rhine river. Once a month, the interior of this fort is decorated and plays a part of the in-character tavern... which can appear anywhere, and change layout... I took the photos during the day, as during the event itself (6 PM - 2 AM) it was dark and very dimly lit - plus, characters were already role-playing, and I felt bad taking my phone out. However, a photographer Kira Hagen was there, and made a lot of character portraits so you can see how some of the costumes looked like.

Regarding the rules, a hard-to-find note mentions that Dragon-Sys ruleset is used, but any other rule system is generally OK and SLs (game masters / organizers) are available to discuss character ideas and implementation. In practice, as it is common on German larps nobody really paid much attention to rules and playing was about pure DKWDDK improvisation.

My outfit was rather simple (black pants, off-white tunic, grey hood, some pouches, and fake nails), as I flew in the city with my in-cabin baggage only. I arrived at the event with a group of friends, which was an interesting experience as we dressed up beforehand and took a tram there. We were far from only people taking a public transport in costumes, as the location doesn't really have any space to change. I borrowed a sword as well, since bringing my two-handed Calimacil sword was not something I was looking forward to, considering the hassle on airport.

The signup included simply paying the entrance fee, and getting a security stamp on hand. The entrance fee was 10€, however 2€ of that was returned in a form of drink coupons. The drinks were very reasonably priced for the area (1.5€ for 0.33l of beer or 0.1l of mead). The larp organizers (called Twilight... you're probably thinking the same thing I was thinking right now) are running a system which rewards frequent visitors (tracked via cards that get stamped) with silver, golden and platinum cards, carrying some benefits such as reduced entrance fees, certain amount of free drinks (or entrances), gifts, access to special areas, partner discount etc.

Interior decoration was very nice - they did the extra effort to make a spooky Halloween atmosphere. There was fake spiderweb everywhere, and it often clung to costumes or people. Tables were illuminated by spiderweb-covered candelabra, and there were large candle chandeliers hanging from the ceiling - the in-character feeling of those slightly broken by modern red stage lights mounted next to them, which gave a nice red illumination to the entire tavern.

Most of the plot was left to players role-playing together, but there were some things organized by the organizers. Apart from the "tavern" itself (and the courtyard where a lot of play took place), there was also a dungeon accessible through a dark and narrow stairway that spiraled downwards. The way down was dark, with narrow corridors and low ceiling which created some trouble for taller players like me. At the end there was a room with hanging skeletons (headless), an empty coffin, and several other clues. My group didn't figure out what it was about - perhaps we arrived too late, too early or without proper preparation.

Even though I saw some familiar faces from ConQuest and Drachenfest, most of my play was with the group I came in, whom I met on ConQuest. Along with the photographer (who was American), I was the only non-German there, and since my knowledge of German could use much more improvement, spontaneous role-playing was challenging in that situation - but that doesn't mean nothing happened. Apart from exploring the dungeon, a couple of us joined a fight which formed in the courtyard after some Chaos guys caused some trouble. I got a taste of line fighting once again, even though the combat was rather short and with not a lot of participants. We also did some practice dueling afterwards.

Overall, the event was quite nice. I didn't notice any issues (although it seems there were some, according to the discussions on internet - but that tends to be a common thing in all larps). It seemed to be about 200-ish people, but I'm eyeballing the number here - it was a small larp for Germany, but bigger than anything ever organized in Croatia. I recommend a visit if you're ever in the area - the larp has a facebook group.