From PoRtaL to PoRtaL 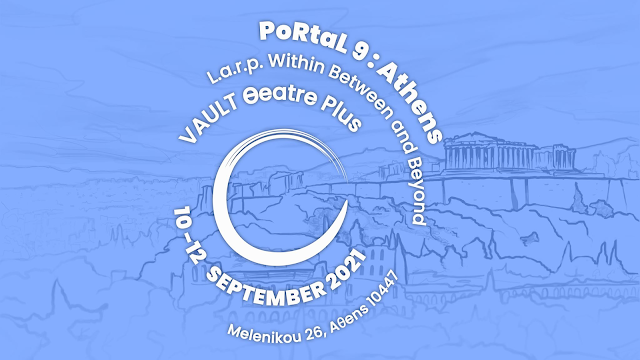 The PoRtaL conference had truly gone international. After the first year it had gone to Hungary. It switched between Budapest and Zagreb several times, until it went to Plovdiv, Bulgaria in 2018. I skipped the seventh, which was in Kyiv, Ukraine as I could not have made the journey at the time. I was on the eighth one - in Zagreb, in March of 2020., subtitled "Infinite play" and ran by Terrible Creations.To say it was great would be seriously underselling it. It was very diverse, with a lot of friends, new faces, and some big names in international larp. I might have fanboyed a little too hard over finally meeting  (and playing with) Mike Pohjola whom I interviewed on this blog all the way back in 2012. Great talks, larps in the evening, and hanging out in general.

During the event, I promised to write about it on this blog but (until now) I never did. The week after PoRtaL 8, everything changed and the world turned to a living nightmare due to the pandemic. I was really not feeling my best self.

People got sick. Some didn't make it. Public life, as we've known it, pretty much stopped. Businesses broke down. And it was not only the pandemic, there were also earthquakes and floods in that period causing significant damage.

Some larps still happened, but they were usually out in the open and with a very few people attending. SFeraKon, traditionally the largest convention in Croatia, happened twice - but both times outdoors, and with many precautions. It was not completely devoid of anything - a year ago, I attended a fun larp by Sven Nemet inspired by the Labyrinth movie. I wrote a small Ferengi-based larp called Lobes for Business for the Star Trek fan club Sekcija 31, and I ran it privately and on latest SFeraKon. But overall, these were like drops of water in the desert. Precious, but few.

PoRtaL 9 would be set in Athens, Greece - but it was apparent that the traditional dates for PoRtaL, around late February or early March, could not be kept. After shifting the date to September 2021, and a later venue change, PoRtaL 9 still happened - subtitled "Larp Within Between and Beyond".

Due to work stuff, I almost didn't make it. Some last minute arrangements took place. I got my overly expensive last-minute plane tickets, submitted two chamber larps I previously ran (Izgon: The Experiment, Arrival at Tau Ceti), and flew to Athens, with my vaccination certificate (so I can enter the venue) and the passenger locator form required by the Greek government.

Christos, a friend and a PoRtaL regular since PoRtaL 4 and now one of the PoRtaL 9 organizers himself, was kind enough to host me, and given the choice I always find couchsurfing with friends more fun than airbnb or hostels.

The venue (Vault Theatre Plus) was large and well organized, with a bar and terrace on the ground floor. Every program item took place either in the basement, or on the two floors set up as theatres. Which means there were often three full tracks of presentations, panels, workshops and larps. Some of the talks were streamed, and are available on this channel.

Prior to the convention proper was the part connected to the Erasmus+ project "Transition of LARP to the field of adult education" - I missed that part, but I was there for the convention proper. Apart from running the larps I brought during Friday and Saturday evenings, the tracks I chose to attend were workshops and larps during the day which I found interesting.

And oh my... they were amazing. The larps and workshops I've been on; the experience of running larps for my players; talking to others during the breaks, and when we went out for meals or drinks after the convention. There seemed to be a shared sentiment, of many of us who were excited to finally be doing something larp-related, with other great, innovative larpers and creators. After all this time, it finally rained in the desert. The organizers shared this sentiment on Facebook, and for me it hits every possible mark: "We cannot even begin to describe how grateful we are for this community and the impact this experience had after a long one and a half year of plague."

I skipped Sunday, the last day of the convention, as my flight was early in the morning. I still miss some faces I've been used to seeing on the previous PoRtaL conventions. But for me, this was a weekend that will remain close to my heart.