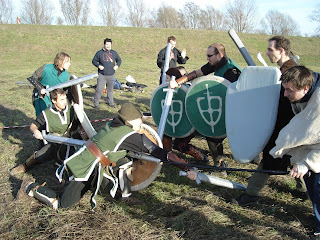 Krvomeđe is definitely getting bigger and better every month now. This Sunday we were blessed with great weather - it went up to 16 degrees Celsius. After a long time of temperatures below zero, it felt almost like summer. It was actually warmer than Krvomeđe days in the past two months.

It started earlier than last two times, giving us enough playtime during that short December daylight. The scene was already set up when the game started, and there was no downtime in the beginning because we did some ditch fighting until everybody got dressed and ready for the game, and then some couple of minutes more until everybody warmed up before we started games - capture the flag and capture the base variants.

The last game was particularly interesting. It was CTF with one flag, which was initially placed on the bridge, and had to be held in base for 5 minutes, while there was also a monster team which attacked both regular teams.

All in all it was a good exercise, and good way to keep our battle skills sharp for those large multi-day events. I got a bit overenthusiastic with floor rolls etc, and paid for that with bruised ribs on my left side. It was still totally worth it. 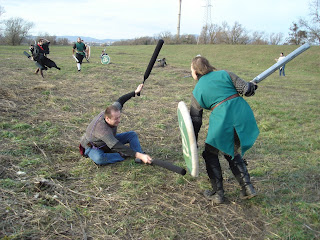 I also had the first opportunity so far to test my new chain mail, made by Urban. It's still not finished - it needs some lengthening - but it feels great. We also had Igor and Dušan from Serbian Green Banner who visited us, though it's a shame they didn't join in the action. You can see the full gallery here.

Next event: Rajski Vrhovi feast this weekend. Last sleepover event of the year. The weather is going colder fast, so we'll see how it will be on the mountainside this Saturday. But together with Maksimir the Saturday after, it will be a nice conclusion of this years' LARP season.