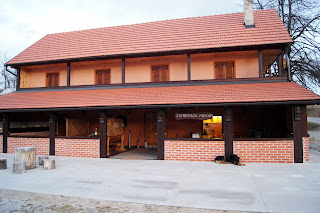 As I'm writing this, I just came back from the Rajski Vrhovi feast, which lasted from yesterday afternoon until today early in the morning. It was held at Žumberački podrum bar in Budinjak, close to the terrain of Rajski Vrhovi - in fact, the bar is owned by the same people as the terrain.

We arrived around 3 PM, a bit late (due to reasons which I'll explain in my next post, so stay tuned) but the feast just started although roleplaying has been already going on for a while. We had lunch immediately, an interesting goulash with polenta. The goulash had some pears in it, so it was definitely something I haven't tried before, but it was great.

After that, we had some bardic competition which was won by Melindor and his "Steppe Wolf" song accompanied by ukulele. 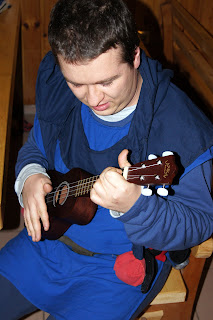 Congratulations on the win, Melindor!

The main quest started then. After someone made a certain ritual, frost elementals started to appear. I was one of them, and since I was a photographer on the event I didn't take any pictures of us as we were too busy playing - sorry about that. But we were wearing white, with full face masks and everything. Parts of our costume was purely white, and a part was glittery white.

Which brings me to the one of the most unforgettable moments of LARPing. As me and another frost elemental were taking a break near the edge of the terrain, a car came nearby, the driver slowed down, lowered his window and took a good look at us, for about two minutes. I can only imagine what he thought at the moment, but I guess this is how local legends of weird cultists are born.

Since we were practically infinitely respawning, players bunkered in the house (and we gave them a good scare by howling into ventilation vents, scratching at the doors and windows etc.), while they attempted several rituals to banish us - those rituals failed with sometimes funny effects causing lots of death and mayhem. In the end they killed enough of us, so we dropped the required components, and they completed a ritual successfully and melted us down. 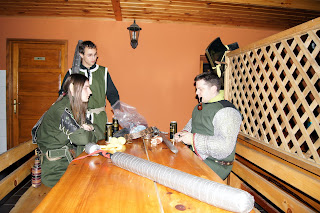 We had another meal after the quest was done (goulash was reheated), and afterwards there was just pure roleplaying, and several quite interesting situations in it. But we spent so much time as ice elementals that - including the botched ritual attempts - made this probably the bloodiest and most deadly feast ever.

Luckily for a lot of players, since this was an official Amtgard event, players' death was not final here so everyone had a lot of action and fun. However, of all Rajski Vrhovi events, this one had the best quality roleplaying so far.

The weather served us well. Although it was not as warm as the last weeks' Krvomeđe, it was warm enough. You can see the full event gallery here.

We went to sleep a couple of hours afterward. The room isn't so large, so it can't support a lot of players sleeping. I slept on the table rather distant from the fireplace, and it wasn't cold (certainly warmer than in Crkvari) so that's a plus from me.

And some final words of wisdom to our Croatian players and everyone shopping in Croatia: never ever buy Ambrosius beer from Kaufland. It tastes like a shampoo. I learned the hard way. Stepehens brau (also from Kaufland) is well worth the price difference.