April 27, 2012
So there it was, the first day of Eurocon. Free for everyone wearing a costume, so I went there with my wife in our Terra Nova costumes - and we brought our son along.

Costume-wise, us fantasy LARPers pretty much owned the place: 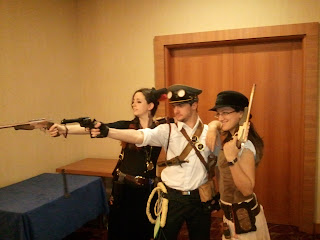 Other costumes also appeared. Apart from the Team Fortress 2 team, there were plenty of Steampunk characters, some anime cosplayers, Pikachu, Wolverine, a couple of pirates... And several other characters. There weren't many sci-fi character there, I saw only trekkies from USS Croatia and (much later) a Princess Leia costume. They stood there as the sole pillar of SF on Croatia's largest convention.

The venue was Hotel International, as it will be today for the first half of the convention. Though more luxurious than the usual FER location (where it will move today at 7 PM), it's way smaller so yesterday was crowded and hot inside. But they made up for it with free drinks. There wasn't much of a program, it was mostly just hanging out.

The international character was showing. I met some Finns, Hungarians, Slovenians, Brits, and even a girl from Australia who gave my son some shiny Australian flag stickers. And of course, there was Oleg, a regular Czech visitor to SFeraKon.

Afterwards, we went off to Mali Medo for some drinks - half the convention went there as the organizers arranged a 10% discount. We left relatively early (at 11 PM) and went home. Damjan went to sleep as soon as we put him in a bed. 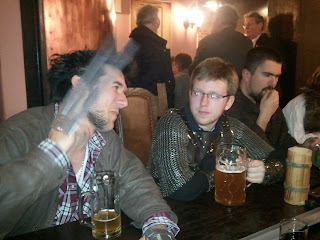 Anyway, today's review is over. I'm gonna have some lunch now, and back to Eurocon for me. I'll be participating a panel at 19:30 in room A220 considering the future of LARP, so if you're gonna be there you're welcome to attend.