April 01, 2012
Spring is here, and everything turned green. It's surprisingly how everything out there turned vivid in the last week or so. Anyway, I was quite busy last weekend as it was my birthday and unfortunately I missed the most recent Maksimir LARP. However, I got my fix of LARPing this weekend certainly: I was out there yesterday filming some stuff for Terra Nova (which you'll see soon, I won't spoil it at this moment), and I was on today's Krvomeđe, ready for some battle. 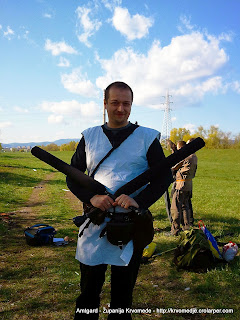 Although I was a bit late, I was ready quite quickly. The location shifted a bit towards the river Sava (where there was shade to be found) and plenty of interesting games were run.


It was a nice exercise with several (though not too many) nice people (full gallery available here), and served to remind me that some more exercise probably wouldn't hurt me. I ran a tournament (8 people, short sword, only linear movement front-back allowed), which was won by Basil. Waiting for our next event, which should be Maksimir 57 in two weeks (post-Easter).