Before I visited ConQuest, I went to a Warcraft Live larp in Hungary, seventh part of its' series. Like last year, it was played at the same terrain near Tatabánya (about 60 km west from Budapest), where Chronicles of Demgard is also played (on a side note, there was no "international" Demgard event this year, so this year Warcraft was the only larp I've been to in Hungary - alongside with PoRtaL of course). As its' name suggests, Warcraft Live was built pretty strongly with Warcraft lore in mind, and the main story relies on it - I will be using some Warcraft terms in this review, if you find something unfamiliar you can refer to wowwiki or another similar resource. 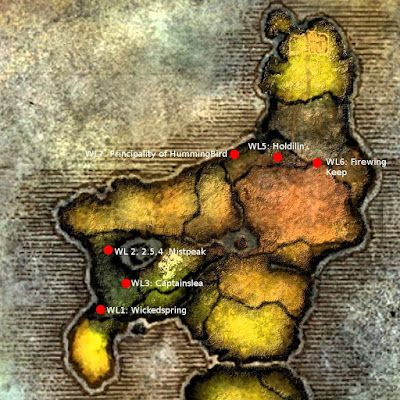 The setting was in the non-canon place called Principality of Hummingbird, but since it's located in the currently inaccessible part of the world map this was not really an issue. Although, the weather on this year's event was so hot and humid that it could have easily been set in the Stranglethorn Vale... Anyways, the principality was an outlaw haven, ruled by an unknown entity (supposedly a powerful wizard) called the Hummingbird, who created a protective shield around it. The timeline was sometime during the Wrath of the Lich King expansion - perhaps near the end, as worgen and archaeology also played some interesting parts of the story. There were several rules in the town - public worship was forbidden, as was use of magic and killing other residents.

I decided to create a character using a common Warcraft trope - a generally good guy, who wants to do good things, ends up doing bad stuff due to circumstances. "Road to Hell is paved with good intentions" trope. My character was human, a former captain of Kul Tiras navy, who - after making some unfortunate alliances - deserted and fled, using a cover identity of a simple fisherman. I did actually sell fish on the event for the ingame currency (canned sardines - "in a gnomish preservation device").

During sign up, we had a choice of several factions to sign up for. I chose the "secret cult", to make it even more interesting. Other factions were quite interesting as well - a beached pirate ship which was serving as a local tavern, hunters' guild which hunted some exotic monsters (and had special clues around the terrain - also one of the members there knew the truth about my past), an archaeology and cartographer shop, a trinket merchant (I bought a very cool hearthstone from him), and an elven garden.

The secret cult we signed up for turned out to be a cult of Hummingbird himself. We were to help him ascend to true godhood. The cult had only a few members, and we were quite diverse. I admit, this year I was a bit lazy with my costume - it was not terribly original, as most of it was reusing my ConQuest gear, as I was going to ConQuest after. There were some amazing costumes on the event, especially of the elves (high, night and blood elf kind), and a female dwarf that played as well (with beard, furs and Wildhammer "tattoos" on her).


Friday evening started slow, with mostly socializing and hanging out. On Saturday morning we got a task to do some rituals at several places of power (rituals were very short and very loud), which resembled the end of last year's Warcraft live a bit. Along with those marked places of power, there were three ritual sites, for different types of rituals - one was an altar to Elune, other was a fel sacrificial place, and the third was a magical circle. They also had different effect on people based on conditions they got during the play. I found two interesting items along the way - the ritual to restore the memories, and a fel dagger (which was custom made, and really looking like something out of Warcraft). Once we did what was required of us, it slowed down a bit - at least for us, as we no longer had a common goal to work towards, so we basically went our separate ways, led by our own interpretations of what should be done next and playing with other players. As a reward, we got some extra powers during the game for serving the Hummingbird. At one point, I was asked by the GM to pass along the memory ritual to other players (which I probably would've done earlier if anyone asked me about it), so I got rid of it.

On Saturday afternoon, Hummingbird finally revealed himself. Or should I say "themselves". There were three entities claiming the same name, and they were all "Hummingbird". One of them was a being blessed with the Holy Light, the other was a primal troll loa, and the third was a Nathrezim demon. The plot revealed that the altar of Elune was built on top of a prison of an Old God, or a part of it, or a very powerful servant of one... and it was about to break out. From all the solutions presented, the demon's plan was actually the most coherent - he proposed that if we help him free his brother, he will reinforce the Old God barrier, relinquish the title of Hummingbird, and let us leave the place if we want to, so that was what was done (after some negotiation with the champion of players, who was a worgen who received Elune's blessing). As I was seen kneeling in front of this demon (since my logic was my character should worship him as long as he holds the name), I found myself murdered (backstabbed, throat slit) as we were walking to the altar of Elune to do that. And as I was waiting my resurrection timer at the Spirit Healer, the larp ended and we went to debriefing and partying...

Overall, the larp was well done and it went much smoother than last year, although it was far less physical and with less combat - which was something I didn't miss, as it was very hot and humid and I was about to spend a week on ConQuest. The core rules are kept really simple, and they mainly work based on the "trust system" which is also used in Demgard, which is mostly improvised. In addition, health and mana were refered to in percentages, and there was a lot of "hidden rules" and hints known only by some players, as well as info marked on cards only readable by some players. The level of people being in character was high, almost all players spoke English, and would usually switch over when I was in the hearing range, which was very commendable. It was fun and I'm looking forward to the next one...