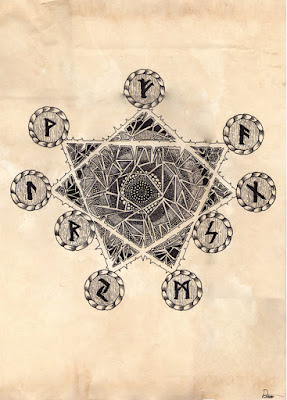 "Another Izgon larp?", a friend asked me two years ago as I announced the previous larp of the series. "How about doing something new?"

I was stuck with these questions for a time. New stuff. Well, of course there was innovation in every Izgon larp - an urban fantasy pervasive series which I started four years ago. Some stuff worked. Some didn't. In the background, however, the same principles still did apply. There was secrecy. Long playtime of being in-character. Mana gathering to open a portal back home. It worked. Lots of people had fun and amazing experience, it became the first Croatian larp that was novelized, and as with any larp there were some people it didn't work for.

But that question about doing something new remained.

Izgon: Ascendancy is very much a new larp, although it shares the setting with the previous ones. There will be different structure. Different character building. Different focus. Different mechanics. And a very much different feel. It will reflect stuff I learned over the years, such as during Enlightenment in Blood which is a major influence in design of Izgon: Ascendancy.

It'll be a spiritual successor of the first Izgon regarding ambition, to do something new that hasn't been done around these parts. A new experience for everyone involved. To redefine preconceived notions of how a larp can be made and played.

This larp is built for its' players, featuring highly collaborative play and tools to facilitate it. Players' perspective, playstyle, goals and viewpoints will be of highest priority, and this is truly being designed as a larp for its' players.

You may expect lots of interactions, and lots of stuff to do - as well as the ability to carve your own path, and go for your own personal ending.

Izgon: Ascendancy will be held December 1st-3rd in Zagreb, Croatia. More info is available on the website and facebook group.