Creating a quick larp in 1 hour

July 14, 2017
Creating a larp in one hour can be a quick, practical, creative and enabling exercise - and most of all fun. I'll share some techniques, perspectives and examples here, and I'm including this article in the start a larp series (which is seriously outdated, but you might still find it useful). But first of all let's cover some local history...

In ancient times - over four years ago - we ran PoRtaL, the first larp conference in Croatia. At that time, the idea of quick, short, repeatable chamber larps was new around this parts. Ana & Božo, founders of the now-inactive Lateralus association and main organizers of PoRtaL premiered the style by importing and translating Love is Blue, an Italian chamber larp which still holds the record of most runs in the country. I wrote the first locally-written larp of the style - Death of the Japanese Emperor - and PoRtaL featured the premiere of the second locally-written larp of the style, Koliba (The Cabin). 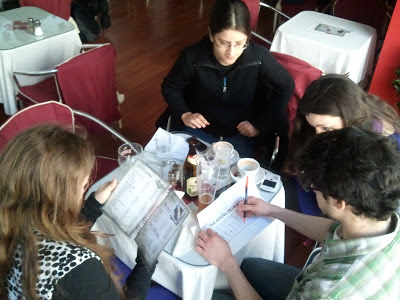 Considering the topic was very hot and new at the time, I ran the first "let's make a larp" workshop in the country. It was certainly not done in less than an hour, in fact it was quite demanding - three days, three meetings of over an hour, and running the larp afterwards. Plus some "homework" to do between that time.

Only four people signed up (Marko, Ivana, Vesna and Brittany), and I was moderating their design process while they provided the creative force and logistics. We brainstormed, used The Mixing Desk of Larp to decide a style we wanted to use, and in the end we ended up with a larp called (Re)union, a family inheritance drama with reasonably fleshed out characters for 10 players + 5 organizers in the support roles. It went reasonably well.

PoRtaL 5 this March started exactly four years after the first one ended. Only now it was a regional conference, gathering larpers from Southeastern Europe and beyond, and switching between Croatia and Hungary KP-style - in fact, Bulgaria is entering the location rotation from now on. Organized in a very professional capacity by Terrible Creations collective and ZFC, it brought many famous speakers from Europe.

One of them was Mikołaj Wicher from Liveform / Dziobak Studio in Poland, who are best known for their world famous Castle of Wizardry larps. And while he did have a presentation on making and running a blockbuster larp, he also ran a workshop covering the other end of the spectrum - The Nanolarp Challenge.

Laser-focused and precise, it cut off what was not needed, and focused on the situation as the core larp experience, using the Pareto principle (80% of the experience for 20% of the effort) to get us to build a prototype that is playable. We split into three groups and each of us built a larp - you can see the original workshop presentation here (in English and Polish, you should read it). The larp which my group (Matija, Tamas and myself) built was called "Who let the dog out", and it involved a... well OK, it was a family inheritance drama again, like (Re)union, although way different in tone. I swear, I don't have a fetish for that stuff. To my knowledge, only The Family Andersson covered that subject apart from the occasional workshop larps.

It was quick brainstorming and then production - the goal was to make it playable, not perfect. Compared to the workshop I ran four years earlier, this one was way more productive than what I basically pulled out of my ass back then. True, time was short and some games ran in parallel, so I didn't get to play any of these nanolarps, although I was present on the run we had.

And we're back in the writing time of this article. Terrible Creations is now a company with their own dedicated larp space, and they opened the first larp bar in Croatia, Crni Mačak. Yesterday they ran their own workshop at an event called LARPaTon (they still insist in writing larp in uppercase which makes my eyes bleed, I made my case years ago). It's actually starting to be a regular monthly thing "every second Thursday in a month", considering the first workshop was one month ago. I didn't take part in that one due to having to do some terribly important things. Like swimming at the beach. #toughlife (edit: I misunderstood, there will be a meeting every month, but not all of them will be this worhshop - even though last two were.)

But I made it to the workshop this time around. Actually, LARPaTon was structured in a very similar way to the Nanolarp Challenge, but with more time to spare. A bit less focused creation advice, some extra local history and locally-relevant advice. And we started. The design process took an hour and looked like this:


And then we played these larps - all in succession. First larp was heavy and dramatic - we all played characters who committed suicide, and were stuck in Limbo. Only one of us would get out, and there was actually a mechanic using which we could support others. The briefing took a while, as organizers had a basic idea of the character, and they developed it together with the player. My character's history might have had something to do with a family inheritance drama (Not. A. Word). It was a 10-player larp, but in the end there was simply no time left for things to develop properly. 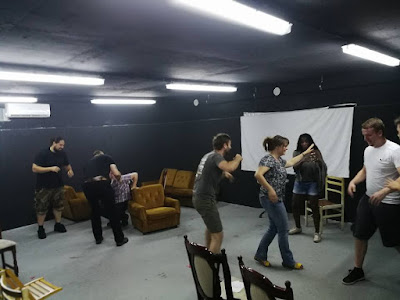 The second larp was from my group (with Wata and Martin) - a light-hearted 8 player larp with a twist about the rivalry of wizards and voodoo priests, as they attempted to decide who will solve a puzzle.

There was a spell mechanic, and people ended up controlling each other to do the really, really fun stuff. Actually, it was a crazy, creative chaos out there. We used a lot of props (a drawn map separated in two parts, two cups each with one half of the potion, and much more), and on the other hand we probably wrote the thinnest characters out of all (they just had a faction and an item), and the larp was over soon as players finished their stuff - before the time slot we had ended.

And then came the third larp. Interesting trivia: like the first one on that PoRtaL years ago, an American woman was part of the writing team, so it was not done by locals only. They actually didn't complete the larp in time, and they've kept writing stuff in all the breaks we had, so I was curious to see what they produced.

Basically, we played patients. We had three emotional conditions we got (switching between them), and a task which was our "therapy". Then, between 8 and 10 minutes something happened, and we switched to act 2. Emotions and tasks got rearranged randomly, and we played a new mix of those - from the start, Groundhog Day style. For another period. And then another time, for act 3. It was like playing the same 10-minute larp three times back to back, with some rearranging to make it different enough each time.

It was one of the best (if not the best) short chamber larps I played in Croatia. Probably in my top 10 total category. Both because of organizers and the players, who did not shy from writing and playing stuff most of the established groups wouldn't dare. Impressive. Most impressive.

And that would conclude my review. But the point I'm making is - if you have a chance to visit some of these workshops, do so. The environment is highly creative, and the potential for fun is very high. Or grab some buddies and do it - ten of us spent more time playing these three larps than we spent writing them and preparing everything we need. I know what I'll do the next party I run... let's do some larps!

Update: After publishing this article, I was also pointed at this interesting workshop called LarpJam (free download) which does a similar thing but in a different way, and with some extra help and challenges :) Takes about two hours plus intro.