February 04, 2012
If you haven't read it before, check my previous post for the background of our trip to Slovenia. Anyways, we did have some bad weather - it was quite cold and it started snowing on Friday. Add to it the usual rush, and we were somewhat late, as the trip took us over two hours. There were four of us, besides myself there were Andrija (Ognjeni Mač's vice-president), Andrej (one of the OM's game organizers this year), and Petar (Timor - one of our most long-time players in OM, second only to me). I didn't take my Sony Alpha, I took all the photos and videos on my cellphone (Samsung Omnia 7), so I apologize for their lack of quality.

We met at the coffee shop of the Ethnographic Museum in Ljubljana. It was quick and rather frantic, as we had plenty of information and experiences to share, there were plenty of people to get to know, and we were also curious about their ideas, plans and experiences so far. We didn't have much time as we were late and some people had to leave early. Although to be honest "not having much time" is a rather relative term considering all of us coming were pretty much hardcore LARP maniacs, and we're all able to discuss LARP for hours without tiring or getting bored, and Slovenian LARPers proved to be quite friendly and open. I actually forgot to take any photos at the coffee shop. My bad.

Before I go any further, let's just say we had several hosts. Martin has been our regular player for almost a year, he's an American living and working in Ljubljana. Both him and his family are quite awesome. Rebeka and her boyfriend Mitja (who is the president of Gil-Galad) are organizers of LARP Slovenija. Both Martin and Rebeka invited us to stay with them for the night. However, Martin invited us at his home for some drinks after the coffee, and Rebeka had some stuff to take care of, so we went to Martin's place. As he went home earlier, we followed Rebeka to Martin's home in Rožna Dolina district - which is an awesome district, although quite a mess to navigate.


Apart from drinks, Martin brought out the dinner and treated us awesomely. We had some awesome time there, and then we decided to split up for the night. Andrija and Andrej stayed at Martin's place while Petar and I set out to find Rebeka's apartment in Šiška district.

After we arrived there, we got treated with some beer and snacks, and had some more talk with Rebeka and Mitja. After that, we went to sleep in a quite comfortable room. I woke up early, and after everybody else woke up we had some breakfast and coffee/tea. At Martin's place they did pretty much the same. I had a headache for the rest of the day, so I apologize if that made me less sociable than usual :) We headed for the workshop in Medvode.


The workshop proved quite fun and informative. We did see some weapons they already bought/made, and also took notice of how their weapons are made. Some people bought materials from online LARP shop, others used locally bought materials (which are similar to what's available in Croatia), and others used the mix of the two. The weapons they made are quite different than what we usually make, as we're mostly into boffer weapons meant to use with full force while they have set out to do latex stuff meant for use with heavily pulled blows. Still, we learned some new stuff there, and we were able to pass out some of our techniques. 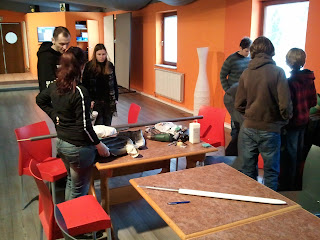 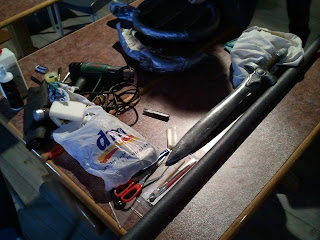 Martin also brought one of our boffers, some latex weapons and plenty of Calimacil weapons so we were able to demonstrate those weapons, as well as perform some demonstrations of our way of fighting, and there were several people who took up some training and sparring with us.

Only weapon to get latexed during the duration of the workshop was Rebeka's staff, but plenty more weapons got shaped during the workshop, several of them with great care. They will look great when finished.

I haven't written so far about Slovenian LARP ideas and plans. It would take some time to do that properly, so instead I took a video interview of Rebeka where she answers plenty of those questions you probably have. This is a first video interview on Crolarper, and it's done in English ;) (I apologize for some camera shakiness)


After the workshops was done, we said our goodbyes and we went back to Martin's house again for some lunch and coffee, after which we headed back home to Zagreb (through a snowstorm), with sad feelings in our hearts because it was so awesome we could have stayed for at least a week... Maybe that would have been too short too.

Thanks to Andrej, Andrija and Petar for joining me on this trip. Thanks to Martin, Maruška, Rebeka and Mitja for being awesome hosts to us (and being otherwise awesome as well). We had a great time, and we hope to see you and other Slovenian friends we made soon.