The Croatian Fallout LARP this year has certainly been an interesting experience. It has been talked about and announced for over three years now - it's been that long since I first got excited about it, bought all the gear, and in the end it just didn't happen back in 2009.

But there has been some progress every following year. The ruleset was pretty much finished by 2010, and the first event was announced for September 24-26 in 2010., in a location in northern Croatia near Čakovec - but in the end it didn't happen. It was then rescheduled for June 17-19 in 2011., the same date as Utvrda Svjetlosti and in the same location... but it was again canceled. Organizer's RL obligations and lack of interest were the main reasons.

Third time it finally happened. It was organized last weekend, August 10-12, in a different location - Popovec, on the terrain of the airsoft club Kobra. With ruined military objects and underground bunkers, it's a perfect place for a Fallout LARP. In fact, Kobras seemed to realize that too, and on November 26th of the last year they ran a Fallout-themed airsoft meeting.

Fallout LARP uses airsoft weapons too, but it's not like an airsoft scenario. It was a regular larp, running night and day, also using boffers to simulate melee weapons. The ammo was limited, and there was also an emphasis for roleplaying and environment. 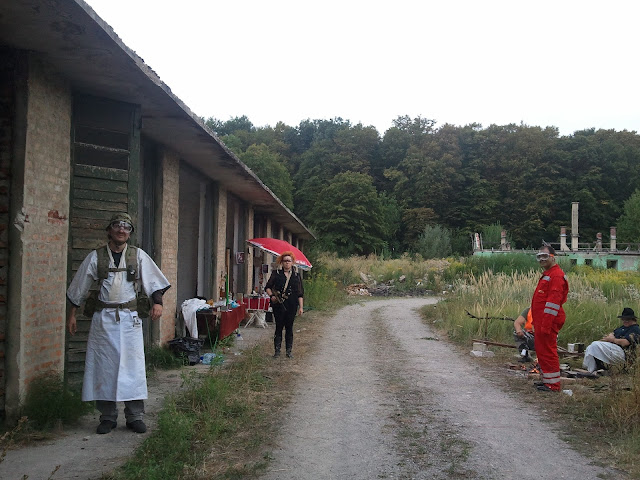 Once again, the terrain was excellent. And so were the details and props - some brought by players, other by organizers. The newspapers were great - two folded A3 sheets with lots of articles and humor. Indeed, the game was literarly filled with good mood and humor.

Unfortunately, I haven't been there for the full duration - only for a few hours on Saturday, so I didn't see much of the story. We were searching for a lost vault. I got myself involved in a friendly fire incident, and got patched up by a ghoul doctor (best done healing I got out of Germany, I have to say!). We stalked a sniper who was taking us out, and followed him through high grass. I got myself a pistol holder, trading a can of sardines for it. And, there was lunch. 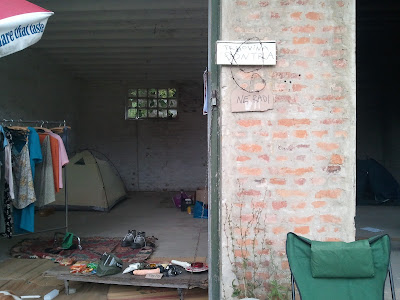 Lunch was an interesting concept. Basically, players bought and donated unlabeled cans of food. Organizers stuck some stickers on them, and they were divided amongst the playerbase for an extra cheap price of one bottle cap per can. Eating random lunch - beans, corn, sausage, pineapple, etc - was quite fun, especially considering once it was done they announced that all cans of certain color had gone bad, and now everyone who ate them got food poisoning... 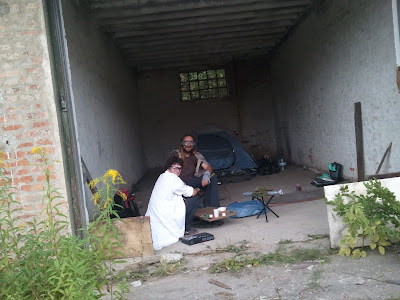 At this point I had to leave, having some things to do. However, later I returned to the terrain (easy, since I live 10 minutes by car from it) and saw the last stages of the drama that was unfolding.

Some players had an argument which escalated, and caused some name calling and bad feelings on both sides, resulting in the total of five players leaving the terrain. Quite a lot, since it was almost a third of the players. Afterwards, the mood was down and Mario (the organizer) was not feeling like continuing... the rest of the evening was spent off-game.

Every player is responsible for making LARP an enjoyable experience for himself and others, to play fair and be kind and patient with other players. Hopefully, people will learn from what happened there so it doesn't repeat in the future.

Total verdict?
From what I've seen, quests and challenges put on players were quite simple (probably had something to do with organizers being understaffed) but quite fun despite that because they were something new, in a new environment. Environment, props, mood and game feeling were excellent. Overall I'd say it was a good event that ended prematurely and on a negative note due to drama - it could've been better had it not happened. Next event has been announced (somewhat vaguely) for the next year. It will be interesting to see how Fallout LARP develops in the future as what was seen this year was quite promising...