The summer is going slower than usual. Majčin Gaj, which was supposed to be held last weekend, has been canceled and postponed until further notice due to Siro falling ill - and he's the main organizer and GM. Unfortunately, the cancelation was pretty much last minute, which sparked some discussions in the community - many players went angry because there was no "backup plan", and the game was simply not held. However, it would have been a different game with someone else in charge. When a larp is guided by one man's vision instead of a group, it certainly has both benefits and drawbacks. Personally, I still hope Majčin Gaj will be held at some point this year...

This leaves Rajski Vrhovi XVII this weekend as the big fantasy larp in the second half of the summer, standing out because unlike June - July there are no other big larps scheduled around it. I'm being a part of the GM team on this Rajski Vrhovi with Ivo and Mario, so naturally I'm looking forward to seeing how my ideas will work out... 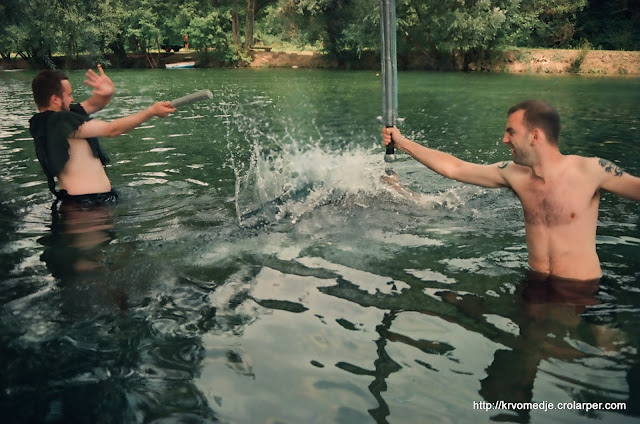 There were some small fantasy games this month along with Rajski Vrhovi. Interestingly, none of them were the usual Krvomeđe or Maksimir. Labuđa Rijeka, the "river larp" tested some time ago went on, and there were two games organized. Not the roleplaying kind, but water battlegames. Unfortunately I wasn't there since it was organized during working time (to avoid the crowd going there to bathe and escape the summer heat for a bit) but players returned with quite positive experiences.

Two larps have been announced for later time - Jaska XI which will most likely be on Oct. 13, and I announced the winter Terra Nova larp (nicknamed Zimograd, or Wintertown) for January 11-13 next year. Further info will be announced as soon as more details are known.

LARP Hrvatska blog also had some interesting articles recently, if you can read Croatian. Their biggest one was the interview about fantasy larp in Croatia. Although it didn't include Terra Nova and Tragači zore, and although one group of players didn't provide answers, it's well rounded and joins the earlier coverages of Serbian and Bulgarian larp they made.

Since we're talking about larp scenes, here's two interesting links to round up the article: Nordic Larp for Noobs by Lizzie Stark and Larp in the USA, as seen through the eyes of a Frenchman larping in Switzerland by Thomas B. Enjoy!