Yesterday was the first Croatian SF larp - well, second if you count Fallout (and there were some Battlestar Galactica investigation committee games), but this is what most people think about when they refer to SF: space opera. Space travel, aliens, laser guns (read: nerf), humanity (and other races) spread across the universe, etc. Carmen is a space station (in orbit around Mimas) for life extension which had been abandoned for a long time, in a distant, dying-universe future in which you could bring any races or cultures, new - which you just invented - or from existing sci-fi universes and works.

I decided to play a mercenary - a space Russian character from a colony around Barnard's Star, with a messed up childhood, converted to Islam, and of questionable morality and sanity. Fun! 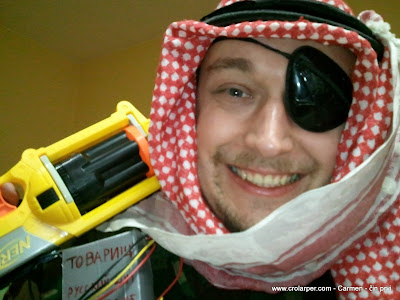 The larp had a grouping concept - a group of people could arrive on the station by the same ship. Our ship, Kverc Šomerc, had the crew/passanger list of four. I was, of course, muscles (and a pilot... wheeee!).

I was the only human character on the ship, while other three characters aboard had masks pretty much inspired by the 60's alien make-up style of Star Trek (the original series). Of course, some other universes were pretty easy to spot.

Sith Lord made the Star Wars influence, while two Chaos guys (Noel and Matija) heralded the first appearance of any Warhammer universe in a Croatian larp. There were also a few ideas about Farscape characters... but they didn't get realized. Perhaps if more SF associations join us in the future in making of this larp... :)

Anyways. The larp was played at Centar za kulturu Trešnjevka in Zagreb. It cost us a bit - 30 kn per person - which was a very decent price for the larp (though it was announced on the day of larp itself...). There were 13 players in total. Zvonimir, who was the GM of this larp, made the intro speech which I recorded in full (in Croatian):


And then the larp started. Similar to Zimograd, the players started one group after another - they were led into two different "waiting rooms". They were later joined (the forcefields between them removed), and players gained access to their ships. A couple of "wanted" lists appeared, people traded, there was some xenophobia, violence and dirty deals, as well as prayer, religious discussion, and attempts to communicate with a completely alien life form. GM was playing a very annoying robot - somehow he avoided getting shot at. He opened a very nice shop, selling some items for the in-character money. At 6, we all teleported to the higher floor of the station - mirrored by us actually moving to the higher floor of the area due to the fact that our venue needed those rooms we used for the show they were doing... 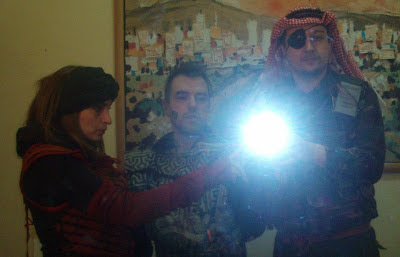 After a short out-of-character break we continued the game upstairs. There was very little GM content by that time - but fortunately, there was a lot player conflict which caused some serious issues. There was theft, swindling, a drug called Gyrum, and explosions which played a large part of what ended up as the most intense moments of the larp. I don't know who caused the most trouble - our dysfunctional group with two girls at each other's throats all the time, and my character protecting Marko's Shar in his dealings. Two Chaos worshipers who'd like to see the universe burn. A xenophobic warrior-monk woman in conflict with all the aliens. A weird alien symbiote, and underneath it my character's long lost brother with a serious issue about which of us is less sane. A hacker, a sith lord, an engineering trader and his companion... And an useless and annoying servitor robot. All of it worked to create a crazy environment, and showed us a very interesting fact: people were very interested in playing a SF larp, and excited to prepare themselves for the opportunity to play in one. And I'll be looking forward to the Act Two... 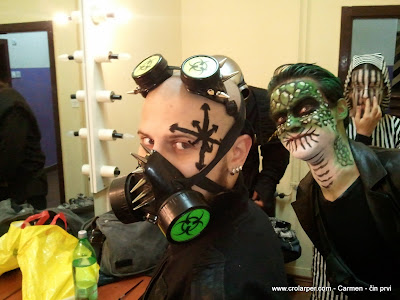