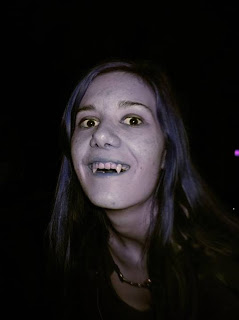 Less than two months since I announced it, it became a reality - Vampire larp restarted in Croatia, in its' traditional Masquerade setting. The larp in Zagreb is somewhat different from how most Vampire larps start - almost none of us had any prior experience with Vampire larp, however a lot of people had experience with other types of larp. I was one of the four organizers who made this larp possible, and the main organizer for this event - a title that will rotate between the events.


The playerbase was mostly existing larpers, but we also drew in some tabletop Vampire players as well as few people with no larp experience whatsoever. Very high attention was put into clothing, makeup and plenty of small details such as the tooth workshop the week before and the make-up lady (who also snapped most of these photos). Two clans were featured in the first larp: the business-savvy Ventrue and the free-spirited Brujah.


The groups were split up in the beginning, Ventrue beginning in an apartment and Brujah beginning in the local park. There was a touch of a pervasivity to it - afterwards Ventrue got in their cars and drove to the Brujah location when they appeared from the forest - and the two groups joined, suspicious of each other but trying to solve the mystery of who killed their sires...


The large part of the larp included some in-character education of the neonate players, and them meeting up, mingling and creating connections between each other.


Brawls, spies, Sabbat, a combat, staking others, "dumping" bodies into the nearby lake and fishing them out, misheard orders, keeping guard, planning the future, calling their contacts, tracking and much much more.


There were a few problems, such as the fact that we were a bit late, and neither players nor storytellers (GMs) were used to this type of ruleset. Some players didn't like the larp, while others found something in it that they didn't find in other larps - which was precisely the intention. Overall, I'd say the first Vampire larp in Zagreb after a long long time was highly successful.