Chronicles of Demgard 2013/2 - The Sternn Pass Incident was the eleventh larp in the Chronicles of Demgard series in Tatabánya, Hungary. Same as last year, two Demgard larps were organized in this year - the first one being in summer being completely Hungarian, the second one being an international event with all game documents in English and English serving as a common language.

Last year two of us arrived from Croatia - this time there was eight of us, arriving in two cars. We were not only foreigners there - there was a guy from Bulgaria who was also present. And there were more people on this larp than last year - 62 in total.

The terrain was expanded from the last year. A new route to the off-game camp was cleared, and so did a part of the terrain where our camp was located. The part of the terrain which represented the country of Uspenland this year wasn't part of the playing area last year. In-character, the area represented the Sternn Pass - a narrow pass which is a border between two countries, Uspenland (a Slavic-like country in the setting) and Western Empire (Holy Roman Empire stand-in in the setting). The Western Empire part was in the unstable region of Gorwenal - practically diametrically opposite on the map from the in-character area from last year's Secret of Hartwigstein. Not all players were strictly on one side or the other - there were a lot of travellers, such as the Bazaar, Elves, or two of the Croats who played tribeswomen from the north.


The campsite itself was a bit on the rough side - the ground was uneven, and the stubs of the cut bushes were sharp and strong, going through the floor of Anita's tent (the one on the left in the photo). Four people from the camp (three of us from Croatia one of the organizers) slept here while others had only modern nylon dome tents, so they slept in the off-game camp - standards which will be slowly adopted by Terra Nova in the next two years as well.

The larp started late. It was supposed to start Friday evening - but some people were late, and some left for the town where they had apartments, so it started on Saturday morning. Still way earlier than the last year's event.


The larp had some built-in tensions between two border garrisons. It was expected that the combat between the two would occur, however that didn't happen due to various reasons.

Some of the people had elements written in their plots which did not trigger on the event - and it didn't help that of the 76 signed up people only 62 people turned up, and out of them only 45 stayed for the full duration of the event - many of them were crucial to each others' story. So the larp started slow, and it was not as involving as the last year's one. Also, the Uspenian side seemed a little underdeveloped compared to the Imperial one.

However, there was plenty of good stuff on the event. Bazaar was an amazingly colorful group of people and they made loads of food (plus tea) for in-game money, including fresh arabic pita bread baked on a metal tray at the fire and filled with some salami and sauce, a chicken stew (though the "chicken" part was questioned, but apparently it was good) and an onion soup (which I missed due to my in-game duties). Together with another location where drinks (juice mostly) and snacks were sold for in-game money, it was a really good deal.

Most of our time consisted of... well... guarding the border. It's a task that plenty of us did exemplary as we were guarding the road. There was also a joint military exercise which involved duels and a melee battle. And a couple of things happened during that time, most notable would be the trial and execution of the mine owner, assassination of the Imperial commander, a cursed ring and its destruction, people sneaking around the forest and attacking the people - revealing themselves to be a resistance group fighting for the independence of their province (Gorwenal, on the imperial side) and being handed the "package" from one of my soldiers, with the "package" revealing itself to be the crown of Gorwenal... some minor chaos stuff, resurrecting a prisoner who commited suicide and then buying her off from the Imperials etc. 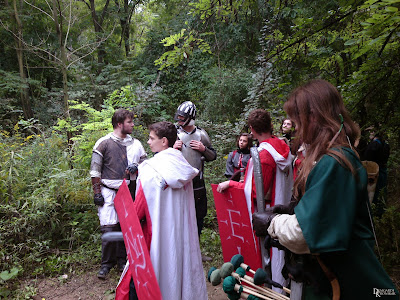 Yet it did not escalate into the open combat, and ended up with a bit lower intensity than the last event. The pacing was certainly different to a lot of our players who attended larps here in Croatia. Running a NPC-less event where players take action has many benefits, but also a few risks. The end-of-season survey was posted, and it will surely provide more insight into the dynamics of this larp.

All in all it was a very nice event. There was a bit of rain, but overall it was warmer than last year (not surprizing, considering the last year's event happened in October). I'm looking forward to returning to Demgard, and otherwise playing with the players who took part in the event.