Tabletop and larp - where does one end and the other begin? 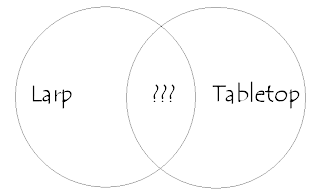 Up until recently, it was real simple to separate the two into their own categories - at least in Croatia. Tabletop was played around a table, people were talked through what was going on, and dice were being used to determine a course of action. Larp was when you got into the woods and hit your friends with foam swords.

And while tabletop has always been a rich marketplace - perhaps dominated by D&D (Pathfinder, in the last few years) there were always other options - GURPS, World of Darkness, Fudge etc. being some of the most popular.

Yet larp started monolithical, and everything different was always met by an angry mob of misunderstanding and screams: "That sucks, that's not a real larp!". I could provide a comprehensive list of all instances where this happened, but it would take approximately half of the article. The only constant is that people regularly disagree what larp is. Let's see a couple of definitions of larp.

"Larp is originally an acronym for Live Action Role Playing, but today it’s used as name in itself. It refers to a type of interactive game or storytelling in which the players assume a role and act as a character within the set fiction. It can be described as theater without an audience or script." - Nordic Larp Wiki

"A larp is a meeting between people who, through their roles, relate to each other in a fictional world." - Dogma 99

Which are, as you might have noticed, much more inclusive than most definitions of larp that a lot of people make up for themselves. And it had resurfaced recently, as I ran two games which were straight in the conflicting part of the Venn diagram on top - they couldn't be placed fully in the domain of another. For some reason, there's been a lot of confusion, anger and resentment - from the people who generally enjoy both styles (or should we say endpoints) of role-play, larp and tabletop. 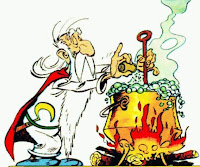 The two games I ran were Dru - a Norwegian freeform game based on collaborative storytelling - and the continuing Vampire larp. Dru is a simple game, and despite the fact it doesn't self-identify as larp (since it basically has 3 or 5 people talking to each other at all time, without required costuming or scenography), it was understood by many as a simple larp. Heck, they labeled it larp on the last Rikon and nobody complained it wasn't really a larp. However, it's flexible - it could be run costumed and in the actual grove, or around a tabletop (only diceless and without character sheets). It's very much about collaborative story-building and even world-building - something very cool, though hard to replicate in a more immersive 360 larp.

Vampire larp Camarilla Agram uses Mind's Eye Theatre system - and it's something completely different from Dru, despite the fact both sit in the middle of the Venn diagram. It offers character options and powers with mechanics much more diverse than most other larps, and it does so with tabletop-like balance and ruleset. In fact, despite the fact it allows for far more in-person actions than a simple game like Dru, its' tabletop origins are far more pronounced - to such measure that the ruleset could be used to play tabletop without batting an eye.

Yet both of those games allow for representing something not entirely possible in 360 larps - and in fact may improve immersion in some ways previously not thought of. Such as a fact that a player might wear an expensive suit to Vampire, being safe in knowledge it won't get ruined, while they would be much more unlikely to wear it on an action larp in the middle of the woods.

To help define stuff, I'll use the Mixing Desk of Larp - an awesome framework and tool which not only helps larp design, but also serves as an excellent demonstration of what larp can be. I even ran a presentation about it on PoRtaL convention (presentation was about V2 - current version is V3) available here.

Let's check the two events which could be described as in-between: Dru and Camarilla Agram. I'll mark them on the Mixing Desk here: 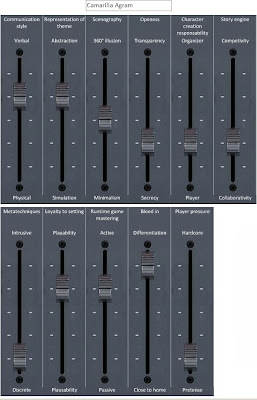 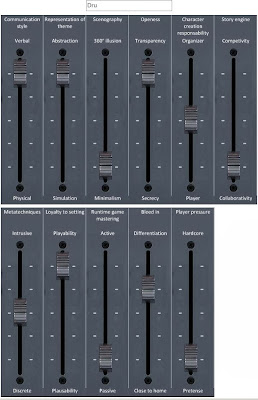 As we can see, there are plenty of differences, yet some similarities as well: Both games are very verbal, abstract, differentiated and with pretense player pressure. Low player pressure is a hallmark of these games, not much more demanding than a tabletop session (or even less). Both rules-light storytelling and high mechanics support the building of verbal, abstract and differentiated environments (though if you wanted to go high bleed, mechanics will present a difficulty). Yet they paint the world differently - Dru with the vivid descriptions of its narrativism, and Vampire with a broad, yet somewhat defined set of skills, disciplines and other powers.

Dru is not unlike an improv exercise. Vampire will be familiar (and possibly appealing) to all tabletop players who played White Wolf, D&D or GURPS.

Let's compare them with two more larps - Terra Nova (which is a classical fantasy) and Izgon (pervasive urban fantasy), which are totally different from them as they are from each other. 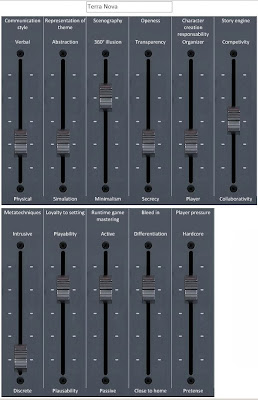 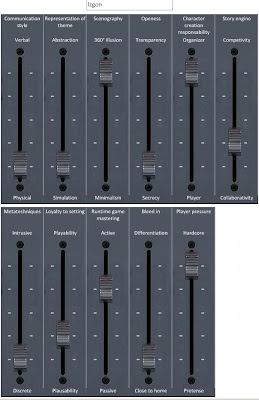 Yet all of these sampled games have similar, describable parameters - and all of them pursue their own goals, none of them wants to be what others are. Because that would truly be a boring larp scene.

So, my suggestion for both players and GMs is to learn to better communicate what a certain larp is about and play for the right reasons. If the communication works, there will be more understanding and fewer arguments. And then, perhaps, people will learn to relax and simply enjoy role-play, with realistical expectations of what they're playing and without fighting about the labels.

Questions? Comments? What do you think?