October 10, 2013
One of the most challenging things about running larps is keeping all the information you have in a way that is quickly accessible, reliable and easily manageable. Technology makes that much much easier. In this post, I'll mostly talk about the solutions that I use myself.

Most of my needs are met by Google Drive. Here's a screenshot from my phone, showing part of my folder structure:

Since I carry my phone with me, in a few moments I can bring up anyone's character sheet, attendance records, background story, check their waiver status etc. no matter where I am. Most of the important stuff is editable, and since Google Drive allows for collaboration, the document might be edited by someone else too - and I'll automatically see the changes. Here's an example of one of the documents - the beginning of my character sheet from this autumn's Demgard (which got an in-character epilogue in the meanwhile), editable by both me and GM. 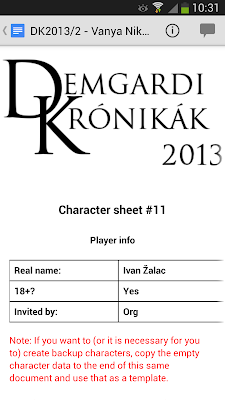 The character sheets I do - for Terra Nova, Izgon etc. - are similar. It was in fact the best practices from Demgard which influenced the way I organize stuff. Some of it, at least.

Terra Nova has a three-tiered sign-up process. First, players need to register and agree to an online waiver - I can access the filled out spreadsheet in only a few seconds. Then, players need to register their characters - done by mail or sharing me a file. This gives them a character sheet, also accessible from Google Drive within seconds. And last, they need to sign up for an event. Here's where I switch to a third system, Eventbrite.

There are several reasons why I use Eventbrite - one of it is its payment gateway, which enables pre-paid tickets from pretty much anywhere in the world. Another one is, it keeps the records neatly. It gives players nice looking tickets. And last but not the least, it has an awesome mobile app, allowing easy check-in for the events, simply by finding a name or scanning a ticket with your mobile phone, and it's easy to see who's still missing from the event: 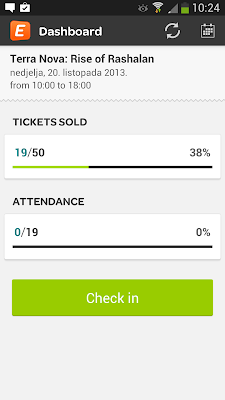 Of course - various larps have various requirements. It's not an universal system that would fit any larp. For instance, Izgon does not use Eventbrite - and many simpler larps such as Death of the Japanese Emperor don't have anything besides one core document.

There are several ways technology can be used to help the organizer present a setting to the players - such as websites and documents. Wiki solutions seem to be popular. I mostly use flat documents.

One of the most enabling features of technology is communication. Facebook and other social networks seem to be the most active places for it. Personally, I'm also fond of Google Groups - they can run with a forum-like interface, or as mailing lists. Forums are also OK, but require high activity to work as intended - a mailing list will serve better for low volume traffic. Whatever the online communication is, it can be used to spread important documents, communicate design goals of the larp, and talk to players. Some larps can also feature online role-play or downtime actions, while others do not.

It's easy to imagine that some larps - perhaps using more complex rules, item economy tracking etc. - would have systems of their own. Some of them could be complex database applications, running on similar principles as most business applications. Some, like LarpCraft, have integrated systems that do everything, which are the main selling points of the system.

And plenty of other larps still rely heavily on paperwork. What are your experiences using technology?