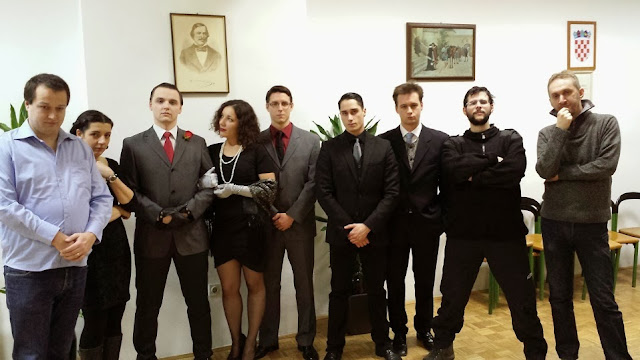 This Sunday's Vampire: The Masquerade larp - the last one in the Embrace the Night series - was quite different than the previous two events. Which is sort of obvious, as each one of them was at a different location, and had a different main organizer. 10 players showed up, and made Embrace the Night 3 atmosphere the one of a rather tight meeting. After it was finished, we gathered in the nearby Zlatni Medo beer hall for some drinks. 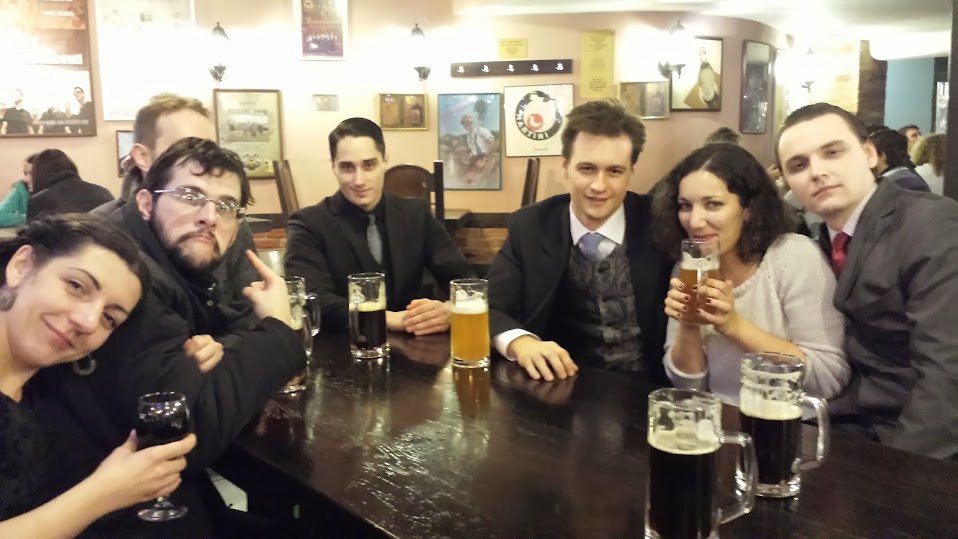 We have also discussed future plans for the Camarilla Agram chronicle. The intro is now complete, and next year the full chronicle starts. The setting style document is available here, and the planned schedule for 2014 is here. Eight big events, spaced month and a half apart - but that's not all. In February, there will be a series of weekly "Elysium" events, which will be meetings in some public space that will feature a small social larp each (low-key, no makeup requirement, player storylines). Basically, it's planned to have as little preparation and playtime involved as a tabletop session, or a drink with your friends. If they prove popular during the February, they will be continued. Some online play will now continue, and tie in with the downtime system to provide some XP for the players - and some of that stuff might move to live or tabletop-ish format, making it a true multi-media role-playing experience. Maximum monthly XP will be capped, so players will be able to pick and choose what style of play they want, without being forced to attend everything to keep up with other players. A lot of those informations were explained in better detail the day after, during the presentation in KSET.


GAMING@KSET is the new initiative with a lot of gaming content, and I had the honor of being the first presenter on it. I was talking about the Terra Nova, Izgon 2 and Camarilla Agram (links lead to the slides that were played, they're in Croatian) for about an hour and 15 minutes. I was filmed by a student who's doing a documentary on larp, so the presentation will probably be available on Youtube at some point for those who are interested. There were a couple of interesting questions, although a lot of people started to play their boardgames before the presentation itself. Terra Nova and Camarilla Agram presentations included future plans - several players of Izgon 2 came along, and some of them spoke about their experiences, and we spent some time talking afterwards so it served like a second debriefing for those that arrived.

While GAMING@KSET was going on, Ognjeni Mač had an internal meeting where they were busy reinventing and redefining their larp. Many new stuff was voted in, and it's one of the sharpest turns in the association's history. Their larps in the current setting (that they share with the Croatian Amtgard larps) will end, and they're starting with the new setting, new rules that they wrote, and new characters (though a form of XP transfer is possible).

Their new setting is situated on a form of a central plane that features planar travel, and a form of the node control. The nodes will be called nexuses, and they'll give a certain bonus to the faction who controls them. Three main forces will be involved - Law, Chaos and Forest. The July event is scheduled to feature a Grand Tournament, where champions of three sides would fight for the boost in influence power to redefine the nexus bonuses. The setting and larp structure have also been designed to allow a variance in the structure of people organizing the events - as it is currently not certain how the organizers' structure will look in 2014.

This announcement has been met with some controversy, as Ognjeni Mač's event attendance, player morale and the number of events organized has dropped sharply in the second half of the 2013. Some cite preparations for this move as a cause for this issue, others cite it as the solution. This is the second time OM is redefining itself - first time it was in the early 2011 - but never before did it hit the reset button, and it's certainly entering a new era. How is it going to look like, we'll find out next year - the first event has been vaguely announced for some time in February or March (which is the deadline for the XP transfer), and more information will certainly become clear during the January...