September 11, 2014
Sandbox is a word which is probably overused in larps. Like immersion, it's often listed as a desirable characteristic, and it is often argued about whether or not a particular larp is sandbox-y or not. Most often, these problems are a result of "sandbox" being very loosely defined as a term. 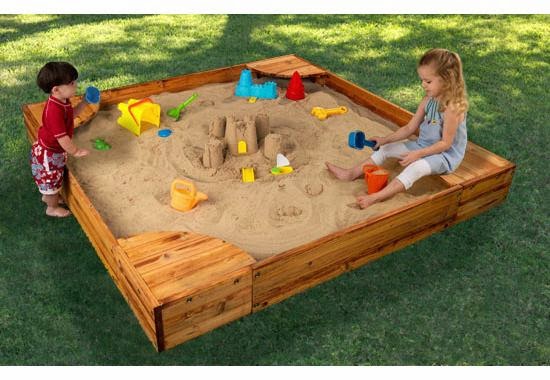 The word was originally adapted from the children sand playgrounds, like the one in your local park where children can freely play with the sand and do whatever. This imagery of freedom was passed on to the video game adaptation of the sandbox term, usually featuring open world and the ability to do whatever you want to and at your own pace, as opposed to regular games offering more of a railroaded experience (see the distinction between famous computer RPG series: Elder Scrolls vs Final Fantasy).

This computer gaming term is important because it is often directly used in larping with its' meaning unchanged from its' roots. And as such it showcases two different approaches which are shown as different extremes in design paradigm: sandbox and railroading. The simplest, and perhaps the most correct definition would be that railroading will always lead to the same ending, along the same path while sandboxing will allow players to set their own goals and paths. So sandbox design is like a box of legos - it can be anything. Railroad is more like a roller coaster ride. Most players adopted the "sandbox good, railroad bad" mentality, but there was very little agreement of where the line is drawn.

The larp design that was most common in Croatian larp until a year ago was pretty much what I'd call railroaded. It typically consisted of a challenge which represented a threat (usually a strong monster), and there was typically one way to beat it - with certain items, rituals etc., as it was typical that the standard abilities wouldn't work well or at all. It was expected that players will succeed in this on Saturday evening. Rinse and repeat with another baddie (or the same one, in case players failed). However, while now we'd call these larps railroaded (hindsight - it's an amazing superpower), it wasn't the case back in the day when there was always That Other Larp Which Is More Railroaded.

Unsurprizingly, people had different views of what made something railroaded or sandboxy. Sandboxy style was often portrayed as "make your own fun" style, which several people understood as "it has no content or NPCs - it is just a lazy way of organizing larps". Beep. Wrong. First of all, players as equal content creators vs NPCs as main content creators is its' own separate topic, not necessarily the main difference between sandbox and railroaded larps. Second, in these two larp styles players will find themselves in vastly different position.

Let's take four Croatian sandbox larps as examples: Para pokreće svijet, Izgon, The Elder Scrolls Chronicles and Camarilla Agram. While they had no NPC armies which would drive the plot, plot was driven from the inside. PPS has some (minor) character goals, characters with vastly different resources from one another, and it has a huge toolset which basically makes the world tick. Izgon had the prewritten character mentality, faction goals, and real-world resource locations which fueled the emergent play. TESC has character goals and faction goals which interact with each other. CA has a strong setting and structure which works as an emergent story engine, as well as the extensive downtime system. All of these systems work. In comparison, the NPC-heavy systems often have no GM-written or supported character and faction goals - they might be allowed to go along with the main plotline (which is provided by the organizers with the help of NPCs), but don't get themselves involved in it. NPC larp with NPCs removed is not the same as well designed NPC-less larp.

While all these systems work, there are still players who prefer more NPC-led larps. Or even straightforward railroad larps. Sometimes because they might get more out of such playstyle. Sometimes because such structures work better in certain cases and stories. Sometimes because the point of a certain larp is experience of a situation which can't change (for instance, nordic larps Ground Zero and Sarcophagus which deal with the scenario of nuclear apocalypse).

And there are other larps which don't fall neatly into any of the categories. For instance, "Love is Blue" was almost a strict railroading experience, with one exception: players were given some tools (1 gun and a few bullets) which were used for drama and guilt but could potentially change the outcome of the larp - almost diametrically opposite to most Croatian larps at that time, which provided for play experience which was more free but the general outcome which is largely railroaded. Another example is Terra Nova - the main plot arc has been pre-written for the first few years, but is very much steerable by the player actions. Everything else is a sandbox, and player actions and decisions make a significant impact on the setting's lore and future.

And to summarize this article and its' point, here's some advice: