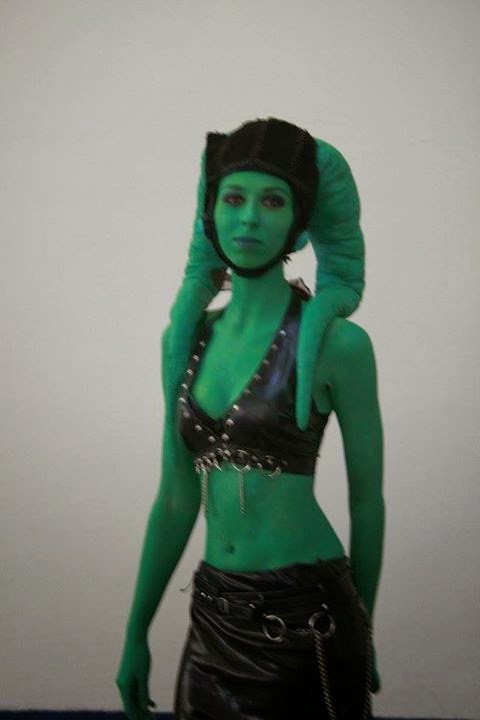 A Star Wars larp by Matija Mihoković and Ivo Turk was played this weekend. It was a fanmade larp, the third in the Star Wars series which started this year (check out the reviews of the first and second event here). It's important to note that the storyline ended here - the Star Wars larp will continue, but it will be played in an earlier time period. So this review is also a sort of a wrap up of all three events and how they looked.

First of all, apologies to everyone, but I forgot my cellphone at home, so I didn't manage to snap photos of this larp. Some people did, but those photos are not available yet so most of this review will be in text.

But if we were to compare looks with previous larps in the series, this one was close to the second event. The first larp still looked best, but a lot of these players haven't returned afterwards. There was one exception though: an amazing Twi'lek costume. And there was a cute Ewok costume too! :)

With the projection room of KKZ being busy due to some guys filming something, we were concentrated in the main bar part of the place where everything took place. This also means that unlike last 2 events, there was not a "secluded" meeting to which only a few players were not invited to. This time, everything was happening together which was certainly a good thing.

I replayed my character from the last time, a pimp by the name of Rothnar Etross from Ord Mantell, trying to gain influence and power, legalize his business etc. The New Republic (our own non-canon variant of it) was on the edge, and it was either going to prosper or crash. Empire was just as close to re-establishing itself.

Actually, the first character I talked about turned out to be a Sith Lord. Or perhaps a Sith Lady would be a more proper term. She dsplayed some of her powers... quite openly in front of me. After briefly considering whether it should be more advantageous to work with her or turn her in to the Jedi, I reached a conclusion that pissing off a Sith lord would certainly not be what any sane shady person would do. So I ended up working with her, caught in the plotline of trying to topple the Republic for my own benefit.

On top of that, there were some shares of the former holdings of Kryan Qasben (a significant and wealthy NPC from the first and second game - got shot in the second game), and I obtained several of them - enough to end up as one of the richest and most influential people in the galaxy by the end of the larp. Near the end of the larp, the plot got pushed a bit and there was plenty of chaos and shooting. The end result was unexpected.

The Sith plan failed. The Republic plan failed. Only one senator survived, and he was de facto the new dictator / Emperor.

I survived the Sith plan failure by being sneaky. Perhaps too sneaky - lesson one of the night: if you shoot people in the back with NERF weapons, they will not notice. I went there OOC to tell player about it ("oh really? I had an energy shield anyway" and then another player shot me because "they would have done so anyway when the shield activated". Meh. I rolled with it, the game system provides me with multiple lives anyway).

I shot the same character later as he was wrestling, but somehow it turned out that energy shield saved him again and wasn't on the recharge despite the fact he was involved in some pretty serious fighting. Meh. I shot his Twi'lek slave who tried to save him instead, that was satisfying. But he won the wrestle.

Lesson number two: if you fail to assassinate someone TWICE, make sure they're not elected the new ruler of the galaxy.
Lesson number three: if you still mess up, being one of the most rich and powerful people in the galaxy helps.

There was a bit chaos in the event. Ending was one thing, but there was also the earlier part when Geralt of Rivia and Edward Kenway entered the game (!). There's been a huge game show that weekend, and some players were cosplaying these characters, and when they were done they headed straight for the larp, without having time to change (they entered in the middle of larp), so they ended up playing two security officers. But there was a moment of confusion when they stormed in the event. Very cool costumes though :)

Despite these problems, there were also improvements to the previous events - in particular, event was very inclusive and ending was very powerful and dramatic. If I have to choose, this was my favorite event in the series - purely on the basis of the storyline, which has exceeded my expectations and wrapped up the story arc nicely.

Also, since the ending moved our timeline away from the Expanded Universe canon, placing the next series in the past is a very elegant solution since it brings us back to the original timeline and does not invalidate what we did on the event.

When I think about it - three events made a story arc here, which is a nice parallel to how three Star Wars movies make a story arc, and going to the past is another parallel to how episodes 1-3 were produced after 4-6. Accident or on purpose? :) One way or another, I'm looking forward to the storyline and characters of the next chapter...