February 23, 2014
Yesterday, the first Star Wars larp was played in Zagreb, Croatia. It's simply called Star Wars larp, and it's set in a time just after Episode 6. The story: after the fall of the Empire, a group of powerful businessmen, industry owners, bankers and various shady characters met in a bar on a planet far away to discuss their further plans and ways to increase their profitability...

But let's get back to the beginning. The idea for a Star Wars larp started back over a year ago after Carmen larp was played. Ivo Turk, who's a Star Wars fan (and played a Sith lord on Carmen), started talking about the idea. And indeed it happened - Carmen rules (with the full blessing of their author, Zvonimir Barać aka Watashi aka Jalžek) have been slightly adapted to better fit the Star Wars setting and the larp was announced. Matija Mihoković joined Ivo Turk to make it possible, and to give it a strong Facebook presence important in these days.

Much work has been done by the two, and the end result was pleasantly deep in its' execution. There was an option to either write our own characters, or get a pre-written one. I opted for the second option - both to allow the GMs to cast me in a role they see as fitting and because I was lazy and didn't feel like writing a character in that moment. I got a human character by the name of Unur Gamet, representing the Bank of Aargau and Intergalactic Banking Clan, travelling undercover to the meeting. The name proved to be a bit unfortunate, as I had trouble remembering it, and I had to remind myself many times both before and during the game.

The larp started an hour late, due to the dress-up time and several late arrivals. It lasted until midnight, less than it was supposed to. But I believe that the duration worked well for the event. The event was held in the Kinoklub Zagreb. The location was in the basement, and it included a bar as well as the projection room next to it. The event had free entrance, but the drinks had to be from the bar (the prices were quite reasonable). To help the mood, in-universe posters (including the various insignia, recruitment posters, ship schematics etc) decorated the interior, which helped set the mood, together with the background Star Wars music being played. 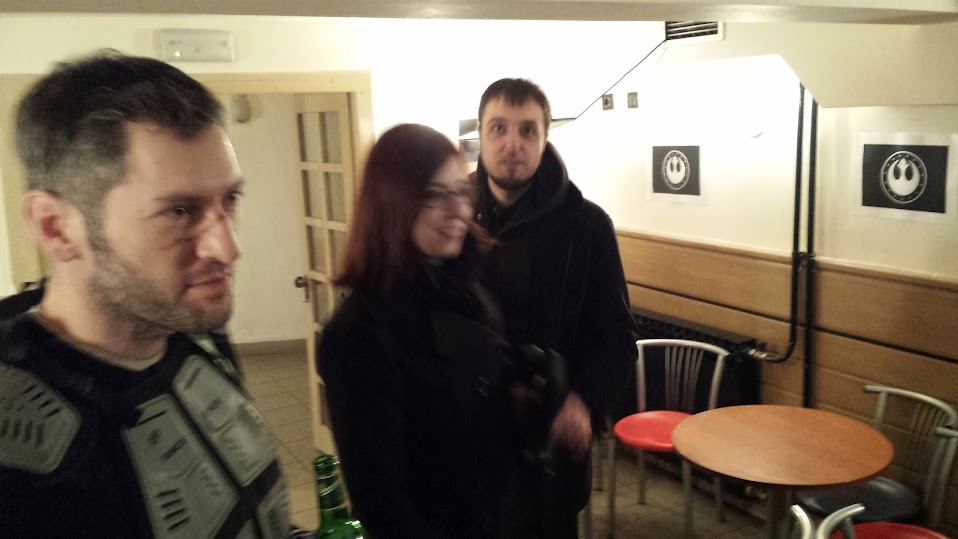 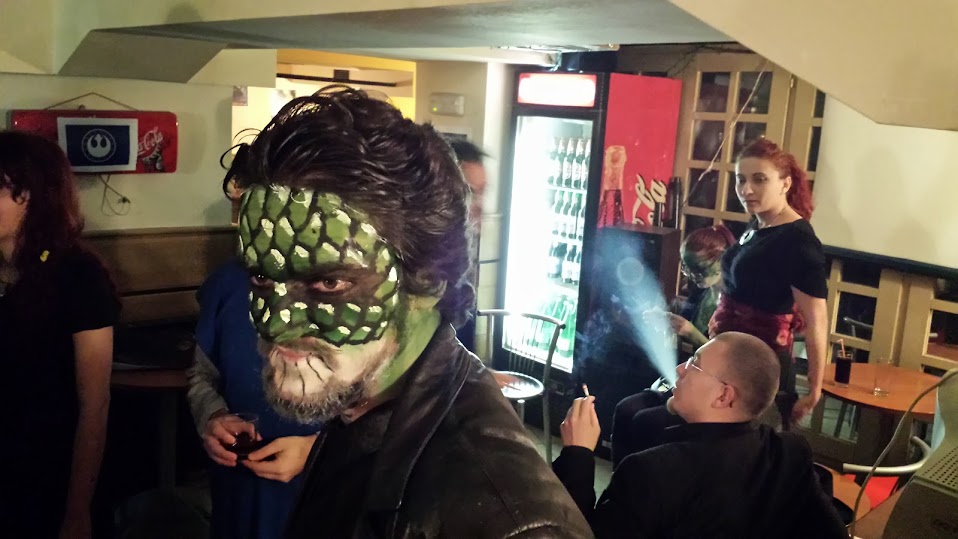 It was interesting comparing this larp to Marko's Elder Scrolls Chronicles series. Both larps share a pre-existing setting known by a lot of players that is rich in the detail and lore, did a good and respectful fan-implementation of it and played it out to the full advantage. Larps in a self-created setting have to find a way to effectively write decent lore and involve players in it. A setting which is well-known by players (by any means) can produce instant recognition and even emotional response, triggered by familiar visuals and sounds and good enough implementation of lore. The same was less true of, say, Star Trek: Tethys (due to the way how it's structured, but it's still an important part in the storytelling process) or the Fallout airsoft/larp (which only has a few touching points with the original lore).

Overall, the social part - played in the bar - worked very well. One part that didn't work as well were the meetings. There were two meetings that together took about one third of the total playtime.


Overall, the meetings were about the creation of a new power in the Galaxy, and selecting a leadership for it. The true purpose of them was not really announced at time, it caused quite a stir with several characters, very little was decided on those meetings and I believe that in the end players went with it just to get it done with already so they can get back to regular play. It would have been more productive if the more exact agenda was put in the invitation we got, as it would avoid discussions we had on spot, not to mention it seemed unprofessional from some of the reputedly galaxy's most powerful business people.


But that was really the only gripe I had with the event. The social game worked very well, and near the end of the event it intensified itself heavily as there was plenty of trouble around. A hidden Jedi and Sith revealed themselves, but they were quickly surrounded and put down by others. I survived several assassination attempts by a Jawa, and slipped away as I was just a banker not carrying guns, dreaming of increasing their interest rates as a revenge...


And so the event ended, on a high note. Future events have been discussed and welcomed by the players. I'm looking forward to them.