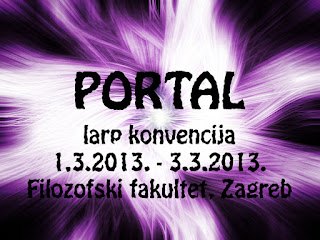 PoRtaL, the first Croatian larp convention is done. It was an end of the really amazing and exhausting weekend. First of all, I have to say that this was the convention where I did and attended most program ever in my convention experience. Having only one thing at the time (with a few exceptions) that most of the people went to was probably part of the reason why. There's a lot of content to write, so I'll split this review into three parts, each covering a day of the convention...

Preparing the convention and all the stuff for it with the other organizers was a wild ride - and an invaluable experience. The programming was done with some things in mind - Saturday and Sunday had workshops from 11-13, then it was time for the lunch break, then for the discussions and panels, and then in the evening it was time for larps. Friday and Saturday were planned to have more internationally significant program, while Sunday was of more local significance. English was the main working language on the convention, and it was used everywhere except where only Croats and Serbs were present.

The convention ended with a bang - but it started quite symbolically. It was Amtgard that brought the first (and for a long time, only) taste of larping to Croatia. The convention started with Ivo Turk's presentation of Amtgard in Croatia. It was quite comprehensively done. Lots of slides, simple white on black, which had a lot of info listed (and said) and managed to cover the historical aspect of different Amtgard chapters, the current state of things, and announced the future events for this year.

I held the next presentation - about my Terra Nova fantasy larp series (available here - in English). This was my fourth presentation about the subject, and I noticed that I'm getting more confident about it every time. I got a lot of positive feedback on the presentation (and I'm definitely switching background next time).

Then it was time for a block of two Hungarian presentations. These were done without slides, and were quite connected. The first was about larping in Hungary, and it was presented by all our guests from Hungary (Sandor, Tamas, Agnes and Donat). Several different scenes were presented to the best of the presentators' knowledge. To my knowledge, we lack most of those scenes in Croatia (including airsoft larps apart from Fallout, World of Darkness larps which seem to have been dead for years, and fantasy camps for children). They had the most detailed knowledge about fantasy larps - they even made a huge and detailed chart representing the development of Hungarian larps (with links including storyline connections and organizer connections, size on chart defining its population etc). Very detailed piece of work. Check it out below: 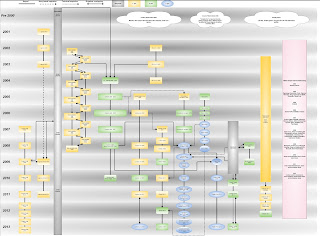 It also connected to their next subject - generation larp theory, which deals with different larp design trends as they appeared over time. Basically, the first generation in this theory is railroaded, tightly controlled, with organizer/NPC led story etc. Third generation is sandbox, with character-oriented and run plot, running strongly. Second generation is somewhere in-between. It's more detailed than that, but this is a short version (more detailed version available here). In the end, we got a really comprehensive overview of Hungarian larping scene - as comprehensive as it gets in about an hour and a half - how it came to be, and several historical larps.

Next on program was a discussion, moderated by Miroslav Wranka (or Siro, as he's commonly known). NPCs on larps: What do we have, what do we need, what do we want? It was quite interesting to see - I knew about the differences about NPCing in standard Croatian model and a German model (as seen on Drachenfest and Mythodea - which I'm also running on Terra Nova), but it seems that NPC-ing also means and insinuates something quite different in Hungary and Bulgaria too. Hearing about those differences was quite interesting. Also, we talked about the absurdity of the name NPC - as it came from the tabletop and computer gaming lingo, it doesn't accurately match the reality of larp. The conclusion from most of the parties involved in the discussion was that NPCs (in some form) were generally needed and desirable from the viewpoint of their larp design - but played in as inobtrusive way as possible.


It was time for the first larp of the convention - and the first split on the convention. Aleksandar Gavrilović from the Starbase Cantina association ran his Horror Murder Mystery - which was quite well received by its players. At the same time, I held another presentation: The Mixing Desk of Larp (available here - in English). It sparked quite an interest - and it was in fact the public part of the Create a Larp workshop which came after. But we were late so we couldn't get another room for that workshop, so instead we did a quick brainstorming session. The team (which was to be between two and six people, preferrably inexperienced in larp design) consisted of four people - Marko Zadro, Ivana Delač, Vesna Kurilić and Brittany Rastsmith. They would design the mystery larp which ended the convention on Sunday evening.

After it, I went home to get some much needed sleep. The Hungarian larpers, which stayed with me, came along - and we were met by my wife, Jasminka. We opened a bottle of mead, and talked some more before finally going to bed. Tomorrow was going to be a long day, with a lot of program to attend and run...