July 04, 2012
Just under three weeks ago, I did a coverage of SCA Croatia. As I promised in that article, I went to the coastal town of Crikvenica to meet Rebecca. We met at the medieval fair called Dani Frankopana 2012 (Frankopan days - Frankopan were one of the most famous medieval noble families in Croatia), celebrating 600 year anniversary of Crikvenica. 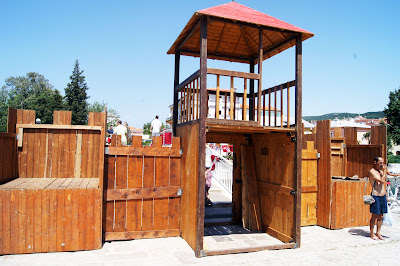 I noticed two larger reenactor groups being there, Red Čuvara grada Zagreba and Vitezovi Zelingradski, there was a nice band called Minstrel playing (wearing plenty of clothes, considering the heat they must have gotten cooked alive in there), and some vendors - I've seen some of them, while others were new, and locals sold quite a lot of interesting stuff. I haven't seen much of the program, which is mostly my fault because I came during the noon and blazing heat, but I got myself some nice stuff for larps.

I might not have gotten the full picture, but I'd call the fair itself a rather mediocre, mostly due to most of it being just one rather cramped alley and two reenactor camps... But after some looking around and shopping, Rebecca appeared, wearing a linen dress and cap. 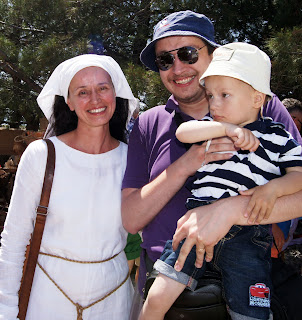 I was there with my wife and son, and we went to find some shade and a cold drink, and then to get to know each other, and discussing about larp, sca and reenactment. What everything is about, and how it relates to each other. To put it shortly: SCA is not necessarily a larp, but it commonly is - though with a slightly different purpose than in our larps, as roleplay is seen as the way of accurately portraying a pseudo-historical persona...  and it's often heavily researched, becoming a lasting alter-ego. SCA organization and combat has great similarities to Amtgard - although in combat, it's fighters who get protected and padded, not the weapons which are rattan. Clothing, naming, historical representation and heraldry get a great detail of attention to historical accuracy - however, 100% accuracy is a goal, not a requirement. SCA is very open to everyone. 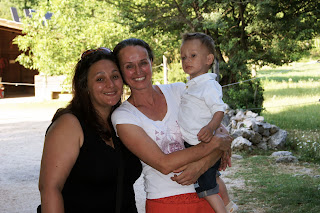 We met with Rebecca one more time, a couple of days later when we went to see her horses - on temporary property before Rebecca's terrain is set for housing them. The Vinodol region - behind Crikvenica and Novi Vinodolski - holds great potential for SCA events, or even larps, and the first event there will be the first SCA event on September 15-16. Plenty of international SCA members have already agreed to arrive. 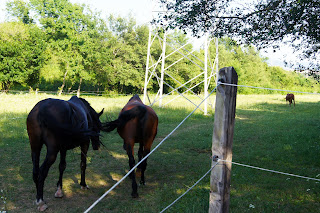 In the end, SCA has a lot of potential. It's not always a larp, but any larpers involved in it will certainly find a lot of benefits - all the historical research, methods and gear, meeting more potential larpers, and enjoying some historical, medieval roleplaying with a different purpose. And with our experience with roleplay, staying in-character and immersion, we can influence the local SCA scene too. Rebecca is also a very nice person, and open to different scenes, and enrichment she can have from different experiences. And SCA in Croatia might offer just that to the local scene. Enrichment. Of the larp scene, of the reenactment scene, and of the local scene. And of course benefit from what already exists. Maybe, hopefully, it will also function as a glue to join the disjointed reenactment and larp scenes in Croatia - it certainly has that potential.