I came back from Crolarp and woke up from a nap I took earlier... As I mentioned earlier, tomorrow I'll be heading to Germany for Drachenfest and afterwards ConQuest of Mythodea, two biggest larps in the world - I won't really be able to write articles in that time, and I need to resume packing soon. But in the meanwhile, the first Crolarp, the biggest Croatian larp of this year certainly deserves a review. 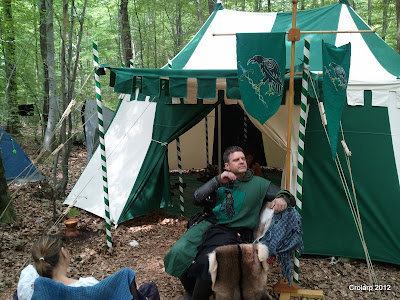 While not the biggest Croatian larp ever, it was certainly the biggest Croatian larp since Summer Sessions. It was visibly bigger than Jaska 8 last year. The quick count given to me by Mladen at the end of the event was 76 people. That would make it bigger than this year's Jaska 10 and Rajski Vrhovi XVI put together. People from all over Croatia came to visit, plus some international guests: Gareyth, and representatives of two Serbian groups, Green Banner from Novi Sad and Guard of Ravens from Belgrade. 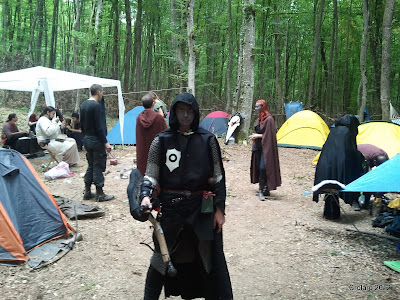 Players separated into six camps total: The Barbarian camp, the City, the Shield camp, the Green Banner camp, the nonhuman camp and the Moranite camp. I'm sure there have been other names for these camps too, but those were the ones I heard used. Apart from those, there was also the inn (or: the terrace) which had a rather central location, and the organizer camp near the parking lot... And plenty of game locations. I'm not even sure all have been found. And while I'm at that - considering the vast terrain that was utilized, this was the biggest Croatian larp ever. The location which was furthest away from my camp (that I know of!) was a good 20 minute trek through the woods, over several hills. The game terrain was truly huge. The camp map and the paths used gave this larp quite a different feel from Jaska, despite the terrain being the same. 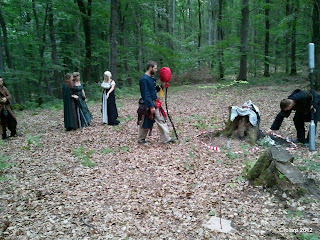 There was a downside to it. With the large number of people and the vast terrain used, organizers were swamped. GAIA's cancellation only made the problems worse due to extra organizers not arriving, and I'm sure the four organizers will spend some time recovering from the experience of going from one end of the terrain to another... Cell phones and radios were used to get stuff done and coordinated. But still, there were some problems - not enough content for everyone, and several stupid situations which would have never happened had the organizers been able to clone themselves. Or if there were more organizers in the first place. It was mostly those tiny things which personally bothered me...

But the player situation was there to help provide the content. The main story was about the war, between king Urban (and his sworn people), and Moranites (and their allies). Helped by the game organizers, it escalated into a full scale civil war, with plenty of action, attacks, sabotages, and political manuevering between two sides (and commonly involving neutral characters). It provided intensive action for those willing to take part in it, and slightly more peaceful gameplay for those who didn't. One of the interesting things - as I speculated, the clans seemed to be back on Crolarp, with every camp running its own politics... 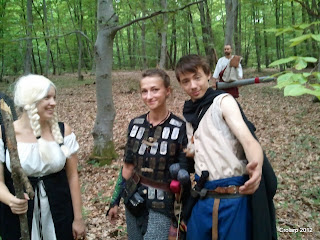 Amidst all that, there have been plenty of opportunities for humor - like the in-character gravestone on which organizers' real names were written. Or the Tai Chi master, played by three people whose combined performance made for some moments which were personally my favorite in this game.

Overall, I'd call Crolarp a success. Though I guess it is a subjective view, as there were players who didn't feel like they had a good experience. And true, Crolarp wasn't anywhere near perfect - there were gaping holes in its execution (though mostly due to external factors) and there were problems, but overall there was something for everyone, and the event did work for most. Cheers to everyone who participated, and especially to the organizers. See you on next Crolarp (and smaller events in-between).