I returned earlier from Rajski Vrhovi XVI. And all I can say is: for me, this was the best Rajski Vrhovi event I was on so far. I haven't been to all of them, the first one I was on was XII in 2010, then XIII in the same year. I skipped last year's XIV in June due to it being rescheduled to when I was not able to attend, but I visited XV last year in August and a shorter event in December. Each one was a better event, progressively, in my opinion.

Something was happening all the time - puzzles, combat, PvP action, roleplay etc, and from how people reacted on the event and from what they told after, they liked it. As part of the quest team for the event, I did some input on the story of the main quest... and did a lot of running and fighting. The main quest was written and GMed by Vjeko and Ksenija, with whom I did Terra Nova over a month ago. There was the necromancer above, plenty of ghouls and gnawing, puzzles, poems and items... Vjeko's teaser published last Sunday helped to set the mood before the game itself. 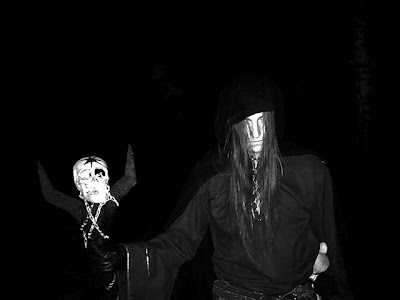 I spent a lot of time playing a ghoul, together with my namesake Ivan, who's otherwise known for playing Alastar. His defining moment was his role of the necromancer, the big bad guy who was defeated in the end. Vjeko and Ksenija did a lot of storyline roles. There were also shorter quests from Ivo and Silvio, as well as some personal quests which were resolved, progressed further or just started. And many other players volunteered and helped for certain parts of the game or logistics. When I was not playing one of the monsters, I attempted to provide some atmosphere...

The main encampment was rather impressive, compared to usual Croatian LARP standards. Some of which was due to effort in making it, and plenty of it due to Gareyth bringing a huge in-character pavilion tent which is a rare sight on a Croatian LARP, primarily due to the cost of one - so we are usually camping in modern tents.

Personally, I believe the most challenging part of helping with running this event was adjusting the intensity and the game style to make most of the players involved in game - in roleplaying and quests, as there were plenty of players with different playstyles and goals. But in the end I believe we created an event which most enjoyed.

Intensive quests, great atmosphere, excellent roleplay, Amtgard, over 30 participants. Rajski Vrhovi delivered. Weather was also great - there was no rain (weird for Rajski Vrhovi) and the heat was manageable due to the terrain being on Žumberak mountain. With the heat wave in Zagreb, I miss the more chilly weather up there.

There were some new players on Rajski Vrhovi, including some which started their LARP career with Terra Nova. Our Hungarian friends who were on Terra Nova didn't join us as they had their LARP at the same time. Sometimes I wish I could be in two places at once...