It seems my review of Jaska 11 had ruffled some feathers. As one of its organizers posted on his facebook profile:

Although I was not specifically named, I assumed this refered to me and my review - which had dared to say something negative about that event (mostly about gamism gone wrong, as I reviewed that event on a largely positive note). Apparently, I'm trying to put down the event to raise my own (Terra Nova). Am I jealous? Well, the golem suit was awesome, but it was probably the only element on Jaska which I'd like to see on Terra Nova.

Anyway, to clarify if this refered to me I've asked the man himself: 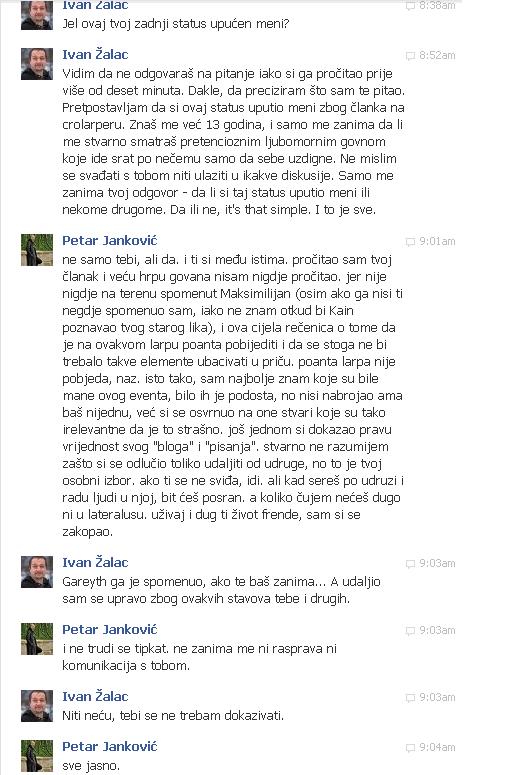 So, the status was referring to me among others (isn't it nice when an organizer calls his players names?). Also, apparently I write huge piles of shit, I'm a liar and my "writing" and "blog" are so worthless that they've had to be put in the quotation marks. And then he doesn't understand why I'm no longer a paying member of Ognjeni Mač (this was not the first discussion in this tone). People skills, man. People skills. And thus ends the friendship of 13 years.

However, if anyone mistook my article for trying to put an event down (or the hard work its organizers and players put in), I apologize. The review was meant as a genuine one from what I saw in a day that I was there, not a pissing contest, just some things which I liked and disliked on it. If anyone took personal offense from it, I apologize.

Here's a few open offers. If you find my writing offensive, I offer to stop writing about your larps. Pure and simple. If you dislike me so much that you have to write crap about me publicly, I offer to stop coming to your larps because I don't feel comfortable myself if there's such tension between me and the organizers and would prefer not to come in that environment. Is that agreeable?