May 31, 2013
As I have mentioned before, last weekend was quite busy. What time I spent on the living history tournament I was mostly busy or having a headache, but it was nice except for all the rain, but I mostly missed that part. We did the Hangout. I missed the Krvomeđe on Sunday, but it had 12 people attending, and fitting nicely in the dry period of the day. The biggest larp thing that weekend, though, was the Highland Games larp.


Well, due to my schedule and arriving late I missed the "games" part, but I heard from the others it was great fun. Caber toss, hammer throw, tug o'war and several other games were played in-character. When I arrived, the sun was already setting - at least I guess it did, the cloud cover was thick enough. The spit-roasting of a suckling pig was just about done, and I arrived at the start of the feeding frenzy. And it really was a sight to behold - I can honestly say I have never seen people who are more happy or excited about their food on any larp ever. The games must have made them hungry, and the pig must have been really good.

However, I'm a traitor to all Croatian traditions as I'm not really a fan of pig or lamb on a spit. Which is actually quite common here, as they're eaten on every wedding, for some families on Christmas and New Year, and quite a lot of other occasions. So I ate chicken, which was also roasted on a spit and it was quite good. While most of us brought our drinks with us, there was also plenty of red wine provided by the organizers.

Apart from food, there was also some role-play which was highly experimental as the event was open to all characters from various other larps - in fact, it mashed them together under a setting which used no rules except for the cut and brake mechanics often used in nordic larps - everything else was pure improvisation. Some players were already used to play like that, while others were skeptical or even fearful of losing their long-running characters. However, there were a few characters only used on this event, such as a water fae, a pig creature, and three dancing fairies. 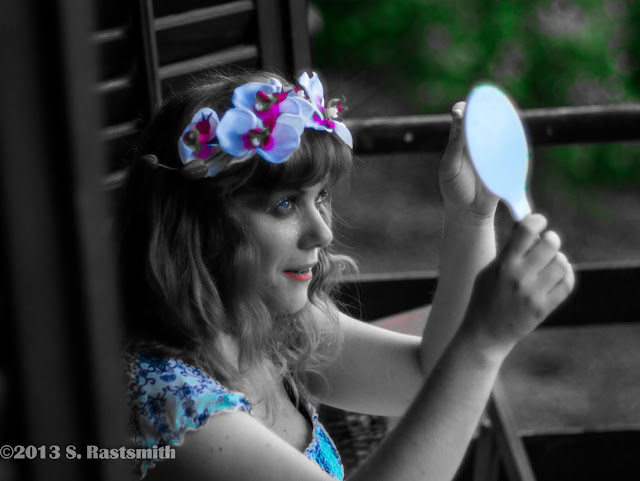 Some special effects were used to heighten the mystical atmosphere. An enemy of our hosts (if I got that part of the story right) appearing after a blinding flash. Creepy noise produced by a tiny drum-and-spring device. Perhaps something else too, but these two are what I've been around myself.

There were plenty of games, food, drinking and song, and the whole experience was quite fun. It also worked from the social experiment perspective of bringing larpers of different playstyles (nordic/immersionist and combat/fantasy) together. Will it make a more lasting impact on those people it managed to draw in? That remains to be seen...