Crolarp 2013 is the national, central storyline event of all medieval fantasy larps in Croatia running under Amtgard rules or some derivative of it - for more info, check out my last year's article. The first Crolarp was held in the same place (Gornja Kupčina, the usual terrain of Jaska larp) last year, and it was the largest larp of 2012. This year's Crolarp started yesterday and will last for the remainder of the weekend. Due to my work, I was only able to attend yesterday evening, for some four hours - so this review is just a short slice of what was going on on Crolarp. I snapped two photos (which I'm gonna post here as first photos from this year's Crolarp), however they don't look so good since I snapped them when I could, and that was in dusk and from some distance...


First, some logistics. The camp layout didn't sit so well with me. There were two small camps, one huge camp next to the tavern, an organizers' off-game camp, and one more camp which I didn't find since when I could I was told it was quite a distance away in part of the woods that I don't know so well, and it was dark by the time so I didn't try to find them. I have a feeling that camp layouts on previous Jaska larp and previous Crolarp worked better, but these larps had more people. Crolarp 2013 had some 40-ish people - however, it was still the first day, some more people are arriving today or tomorrow, and frankly that's still a huge number for any Croatian larp - only few have matched it in recent years. The sign-up procedure was a bit complicated - I had to hunt down one person in one camp to pay, and then the GMs to sign up. Being able to do it all in one place would be helpful. Despite this, it was solved pretty quickly - and from what I heard, there was a single-point payment and sign-up couple of hours earlier, when the larp started.

The time I played was split into two parts, two hours each. In first, I ran a part of the plot that I prepared, connected to Rajski Vrhovi series. I played Jagor, a warrior who desired a heroic death and went around challenging people to fight him, and combating evil (though his definition of evil was something that not everyone would share). Nobody recognized him or the name or connected the dots - despite the fact that less than two weeks ago there was a character dressed the same way (Potjeh) on Rajski Vrhovi who was looking for him... Well, there were two pages of background, storyline and motivation that died with him, but that's something that's always possible on larp - you never know how's it going to finish.

Instead, it got its own interesting moments - the first duel I fought was with a player from Serbia who's used to a rougher way of fighting than it's usually allowed on larps here - including headshots, wrestling etc., and he initiated the same way of fighting with me. Instead of stopping the fight I accepted that sort of play - probably a dozen safety rules were broken there while the crowd gathered around us, worried. It ended with both of us on the floor, exhausted, scraped and bruised (fighting in armors). It was a hugely fun fight, and a couple of times afterwards he thanked me for it - it was also a highlight of the evening for me. The rest of the time playing that character was mostly spent by imposing the character's morality on others, judging them and getting killed for that.

Then it was time for a switch. I took off my helm, armor and knightly garb, put on a robe, painted my face and took off my boots - it was time to play my regular character, a mage called Kain whom I would play for the second two hours of my visit. It was mostly spent low-key role-playing with others, sharing some in-game stories and not getting much involved in the plot. 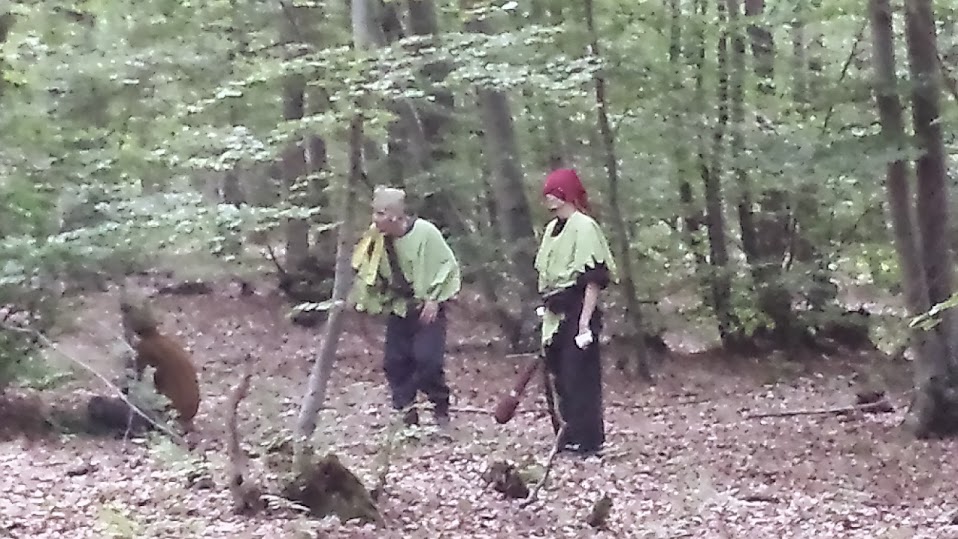 The plot had elements which were highly familiar to me. I could identify most of them as connecting to the Jaska 11 plot, Rajski Vrhovi (to some things that happened there, and some things that should've happened but didn't), and elements from Majčin Gaj. There was plenty of action and some players were already close to being beaten down on the first evening, but there were more plots than last Crolarp (due to more organizers taking part in making the Crolarp), and they appeared better synchronized this year.

Well, any accurate feeling might be impossible to determine from only four hours of the first day of the larp, but it certainly appears to be that way. I'm looking forward to hear how the other days went - if you're going there let me know.