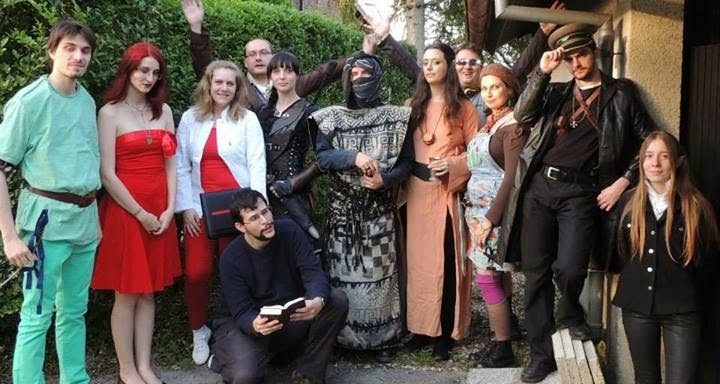 Sven Nemet's Bizzaro larp has been played... I couldn't attend it, but the players there returned with positive comments. The concept for the event was to bring characters from any setting - as long as they were somewhat bizzare in concept. Played on the terrain slightly southwest from Zagreb, it was limited to the low number of players due to location requirements. It was described to me as very sandbox-ey in execution, and sequels were tentatively announced...

This weekend is SFeraKon, Croatia's biggest Sci-fi/Fantasy convention. And I just realized, I've been writing about it in over 3 years this blog's been active. So yes, you can read articles about SFeraKon 2011, SFeraKon 2012 (which was also Eurocon) and SFeraKon 2013. (Some of the old articles' photo links are broken)

Compared to the last year's schedule, this SFeraKon appears less larpy - there's less hands-on stuff such as games and workshops. There will be an increase in presentations though - all of them will happen on Saturday. At noon, right after the convention opens, Marko Zadro will have a presentation about The Elder Scrolls Chronicles larp, in the huge D2 presentation room. And in the evening - at 21:15, after the awards - myself and Goran Bjelić will also run a quick presentation of three different larps - Camarilla Agram, Terra Nova and LarpCraft, followed by a Q&A session and discussion, lasting in total 1 hour. You can find us in the White Room.

Afterwards, you can expect a pervasive Vampire larp event for the players who will be on (or near) SFeraKon. You will not find it on SFeraKon schedule, as it is mainly not intended for general public but instead for the existing players who will already be there - as with other sorts of gaming activities that happen on SFeraKon - and there will be no special space requirements from the organizers. However, there will be an opportunity to get a few interested people in. Bring your character sheet (if you get none, there will be simple pregen characters available)!