The face of Croatian larp scene today looks way different than three years ago when this blog started. There are many more larps today, and they're way more differentiated. However, while I'm the first one that would say such shift is positive, it made larping more involved. I admit - I'm an addict of immersion, bleed and player-driven plots, but still there are mornings when I just wanna wake up, go in the woods and slay a few orcs and save the village.

Last year a couple of us started Camarilla Agram Vampire larp. And it works marvelously as a common larp that can be played every week - but we have lost that option in fantasy. Few fantasy larps in the area function as the ongoing campaigns nowadays for more than two events a year. 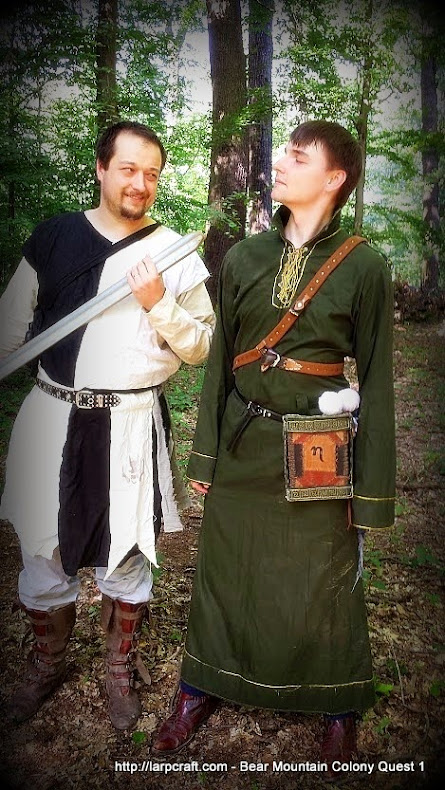 So a month and a half ago we opened a Croatian chapter of LarpCraft called Bear Mountain Colony. We found it to be a very scalable system with an awesome back-end, something that will support a continuous campaign well.

We presented it to people, both online and on SFeraKon. The response was... well, far less numerous than we hoped for to be honest.

We found a nice location in Maksimir park near the 3rd lake. Two weeks ago I ran the demo. You didn't see the report - there wasn't much to report anyway. Only two people came, and they got a nice demo of the system. Some rain and hail caught us, and overall it was quite an adventure.

Today, yes... the same two players, plus the two of us organizers. Though to be honest, I was just the loudmouth this time, doing some marketing and lending the gear - Ivan Kalinić basically wrote the lore and the plot for this event, which is important as this is basically an introduction to future events.

How did it go? How did the four-people event run? Well, the answer might surprise you - it ran really tight. Pacing was great, everybody had fun, nobody got our of character during the larp and we had plenty of nice role-play.

The larp structure was linear, with four different larp locations. I basically played my Drachenfest character (Vjenceslav) rebuilt in this system, and I took the role of an informed character. My character had the visions where to go, so I was acting as a guide to players. The two new players were playing their own characters - a warrior and a ranger - and the three of us made a nice adventuring party.


Ivan set the locations and props up and played various NPCs for the event, plus his own character Quasarius.

The rest of us went from location to location, trying to understand the plot (or deliberately misinterpreting it to fit our worldview), etc. Two locations (out of four) included encounters that we resolved through combat.

But not everything was solving stuff. We discussed our past, military tactics, religion etc. and had a quite powerful dying scene.

After the larp, we all went together for dinner and beer. Everyone involved was pleased. So, was the larp success or not? While it brought in far lower number of people than we hoped to, it turned out to be not only a very good small-population event, but also the way to show how it's done. I must say that so far I have never seen a fantasy event with less than 10 people that ran so smoothly.

I'm looking forward to return to next event and see how plot develops...

All photos are available here.