It's been 10 months since the first Croatian fallout larp - and now it was the time for the second one - plot-wise, a direct continuation of the first one. It was also organized on the same terrain - an abandoned and ruined army property in Popovec, near Sesvete, with half-collapsed buildings, underground bunkers and much more.


Like last year I only half-visited this event due to other stuff I was doing, so I was there only on Saturday. This year had a different main organizer than the last year - Zoran instead of Mario - but both of them were the designers of the Croatian fallout larp, and Mario was still here, assisting. Rules were updated and shortened from 44 pages to 17 pages (both links are in Croatian), and they are inspired by both Amtgard rules of play and regular airsoft rules (plus, the last version also seems more inspired by Ognjeni Mač rules). Most of what was cut was fluff though, not mechanics.

In its second year, Fallout larp is still the only larp in Croatia using airsoft gear. Most other larps which use pistols & rifles use NERF gear, but Fallout uses airsoft which is way more realistic. Which gave me the opportunity to use my airsoft gear, which I don't use on airsoft as I don't play airsoft... Most of the larpers who arrived were using cheap chinese pistols, single shot, with a range of couple of meters and shooting 0,12g balls, which are no match for regular airsoft gear - but some of them were purchasable in-game, for bottle caps. 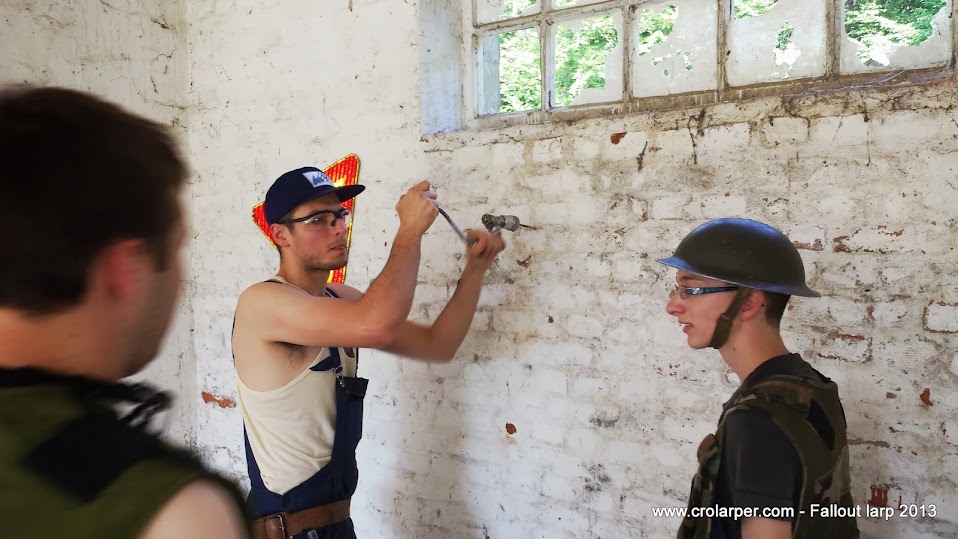 Otherwise, the larp looked very much like the previous one, as there were many similarities. Larp design, challenges, pacing, notable downtime and off-gaming, and even the very similar number of people (though most were first time on Fallout larp - very few of us were the same as the last year), the "eat-random-canned-food-which-might-have-gone-in-character-bad" thing, the IC-newspaper Zgazeta with its very specific form of humor (though this time the newspaper size shrunk, but got in color).

Some other things were noticably improved - e.g. more player played NPCs than last year. There were no incidents which caused players to leave, as last year. And we got a group of airsofters (not counted in the player number, I think there were 8 of them) who joined us. They were playing Brotherhood of Steel soldiers, and they had their own objectives (which worked excellent, as they're a very milsim-oriented group). For them, we were a neutral town full of odd people. And there was some really great interaction between us.


One of the interesting things was simply noticing how Fallout larp can be a gateway for the airsofters into larp - or vice versa. I've heard rumors of a shorter, single-day event in August. With that, and other improvements that were made (particularly in the areas where I did not expect them), I'd say Fallout is certainly on its own development path, which is somewhat unique, and it's moving towards providing a really unique flavor of larp on the Croatian scene. Whether that's good or bad, depends on the features you find desirable. We'll see how this story continues and where it goes next...

A few more photos (I didn't take a lot) are available here, but be aware that some might be NSFW.