Start a larp 10: Larps from the Factory 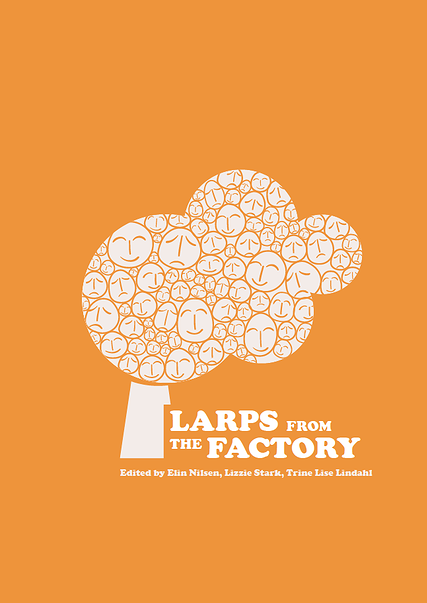 It's been almost a year since Larps from the Factory book came out, and I still haven't given it a proper review... until now. The chief reason for it being a simple lack of time. It's close to 300 pages long, and I got it just as I was running Izgon 2. However, while on my summer vacation I managed to give it a good cover to cover read. Better late than never.

In a way, this book is about the same things as this article series - starting a larp. Or to be more precise, it's about organizing and running larps in the Nordic, larp factory style.

Larp factories are collectives of larp designers producing larps of high quality but very low treshold of participation. In essence, you get a larp which is well-written, simple to produce, and requires a minimum of prior preparation from players. So for example you would attend a Factory larp in a similar way you would go out to movies.

Larp factory in Oslo was the first such group. Personally, I visited the Larp factory Trieste last year, and I still think fondly of the larp I played there. This book contains a total of 23 larp scripts from the two Norwegian larp factories - from Oslo and Trondheim. It presents the ideas and goals of those larps, and a detailed guide of what to do pre-larp, during larp and post-larp.

So in essence it makes running a Nordic factory larp as easy as running a boardgame night. Alright, let's be fair - you need a printer to print out support materials (which is available on the project's website as well as some instructional videos), and there's a few larps with specific location, prop and costuming requirements which might prove to be some extra work. But you'll be able to organize most larps listed in your apartment, in a park, on a convention etc.

You'll find these larps covering a broad number of subjects, both serious (which Nordic larping is known for) and otherwise. Perhaps you're in a mood for kafkaesque dramas? Serious matters about life and death? Open relationships in small groups? A political drama larp exploring the thin line between activists and extremists? Perhaps a larp about therapy by the means of cooking? A boring business meeting of fairytale characters union? Alternate economy wall street where people trade in hugs and similar currencies? A time travel larp filled with paradoxes? Or a lighthearted WW2 pastiche comedy (read: 'Allo 'Allo larp)? Perhaps even a fantasy larp that is a parody of every D&D dungeon crawl? Or a larp about larpers meeting after just playing an IC larp and commenting about it (so wonderfully meta)?


All of these - and more - are present in Larps from the Factory book. And yes, there's some heavy stuff but there are also some lighthearted and even goofy larps.

If this sounds like something that would interest you (or someone else, as this book makes an awesome gift), you can get the PDF on DriveThruRPG for $20 - or if you prefer to order manually and in Euros you can order from the website. The price in Euros is €15 for the PDF (which is approximately the same as $20), or you can order a soft copy for €30, which includes shipping anywhere in the world.

The book itself is well written. Visually, it's designed as Nordic minimalism. I do plan to run some larps from it in the future (and probably pitch some to the local conventions). Last year I ran Limbo, which worked pretty well (the photo in the book is from the run at my place). However, the script in the book is updated from the one I used, and the prepared materials - such as pre-designed tickets - are much nicer than what I've done. It would have been helpful if I had those materials ready when I ran the larp :)

If you're interested in running a factory-style Nordic larp - whether to your family, friends, club, or starting a new scene - this book is for you. Get it. It's like a cookbook for Nordic larp. Just follow the recipe and run that larp.

Diary of a Croatian larper is free and it will always remain free, however I would appreciate your support as it would help make quality content possible. Thanks!