Maska Sumraka - or Twilight Mask as it would be in English - was played on Saturday. It was the third fantasy larp this year organized by Ognjeni Mač (to remind you: the first one was a Maksimir 72 battlegame on March 1st - which was an intro event - and the second one was Put Istine three weeks ago), and the one that was organized as an overnight feast-style event. Basically, Maska Sumraka is a replacement (sort-of) for Sunčev Potočić larp, since their old setting and system got nuked starting from this year. For the record, three Sunčev Potočić events were ever organized: first one in November 2010 (by Petra Sabljar and Ivo Turk), second one in March 2012 (by Green Banner Croatia, with assistance from Ognjeni Mač) and the third one in March 2013 (by Green Banner Croatia and Ognjeni Mač). Maska Sumraka was organized in the same location (Eko Selo Žumberak) and generally around the same time of the year.


Why the name? Well, we all had to wear masks. Pure and simple. Masks which we wore were written in the background of the event as magical, and prevented our characters from getting recognized. So about a week before event started, me and my wife set out to build our masks purely out of papier-mâché, our first and relatively successful actual experiment with the technique (also: this would be our last larp together in a while since she's 8 months pregnant now, so we went there to have some fun once more before the baby is born).

The masks brought were supposed to be Columbina-style or something similar. There was a great variety of masks, made out of all materials - though commercial masks were the most common (either by themselves or as a base for additional decoration), plenty of other styles could be seen too, including a lot of self-made leather masks (some of them the long-nosed ones), full face masks, painted-on masks (for some glass-wearers) and more. There were a few awesome masks which were actually bought in Venice (though with a Made in China sticker on them). There was even a dragonpriest mask from the Elder Scrolls series (worn by Marko - who's by the way the game master of Elder Scrolls Chronicles - and made by his girlfriend, Klara), and that mask looked quite fascinating, especially in the dim light.


But enough of what people have looked like. The real meat of any larp is in its' content...

...oh wait, no. Real meat was in a provided meal, and it disappeared very quickly. But there was goulash, bread and some deadly salad to go with it (everyone who ate salad got poisoned in-character). But I'm getting ahead of myself...

If you haven't read the article, Put istine three weeks ago was rather innovative, mostly in the way of structure and presentation. Maska Sumraka was different in that regard, but also innovative. Its' main structure was based around the scavenger hunt.

The players - numbering a total of 26 plus one organizer (Pavle) - got separated into a total of thirteen two-people teams, by drawing a random animal which many did not recognize. I drew a three-legged cow, but when we got called the organizers realized they needed another team, so we got changed into team dragon. The organizer then told us that there are items we can find, and we should take only one... or decide to be dicks, take all of them and mess up the other team. 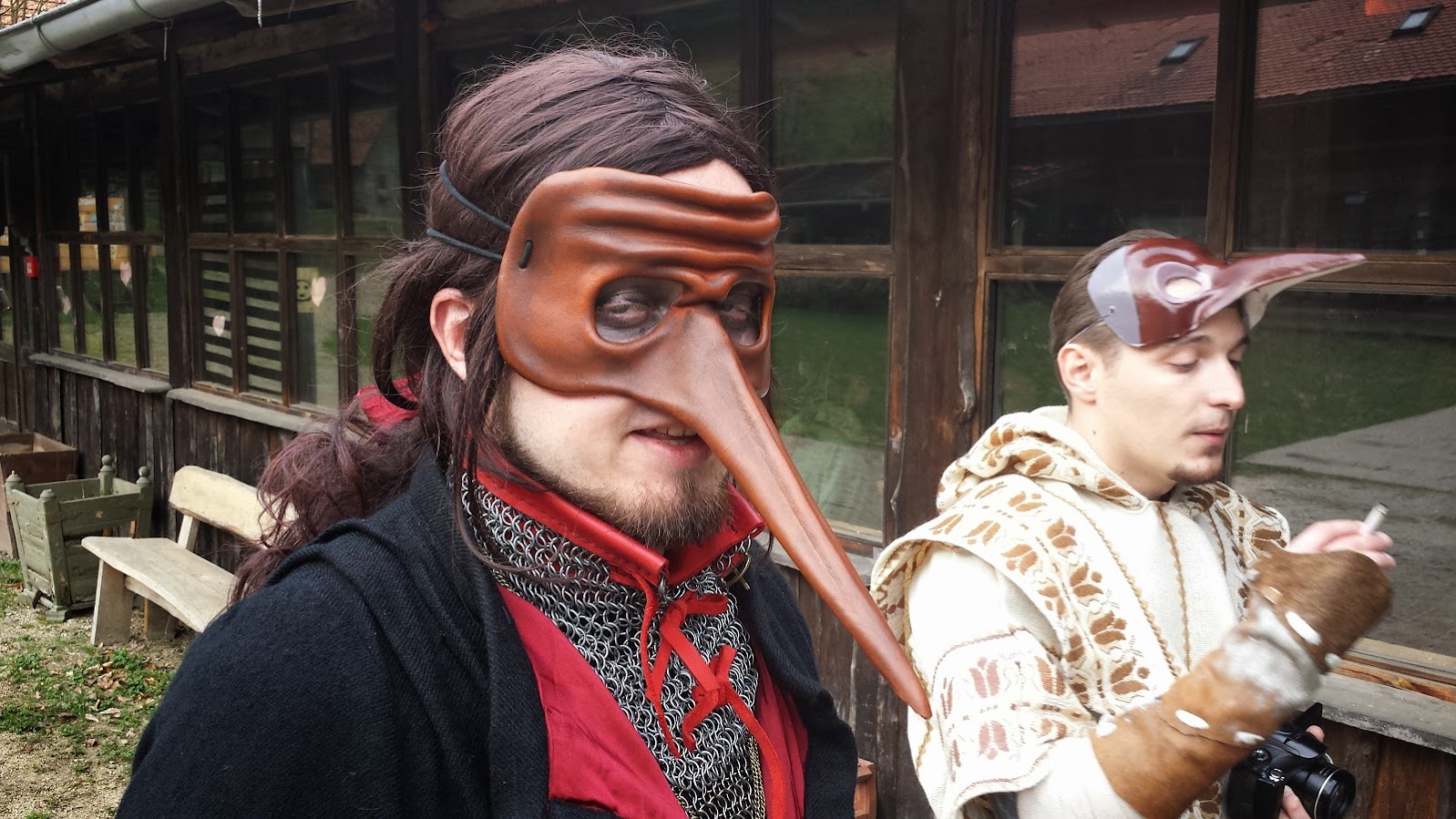 I got paired with a player whom I knew was a problem solver (the right one from the pic to the right), and he's from the same faction as my character - so from the beginning my brain jumped into the problem-solving mode. We went out crazy with a quest we grabbed from the pile (not realizing we should've picked up one each from the 24 more piles, as there were 25 quests in total) and tried finding stuff faster than other teams did - except in places where there were no items because other guys took them first. Which was... yeah, sort of expected but stil disappointing.

Basically, we went out and did things together, and we sort of split our responsibilities - while my partner did most of the trades and deals with other players, I did most of the decoding. Several quests were written in cyrilic, which I know how to read but it wasn't universally the case and people spent a lot of time decoding it (until someone removed the decoding paper, its' fate unknown to the day). There were also three coded papers, and I spent approximately 2 hours trying to decode them.

The two out of three coded papers had "Cezar" written on them. However, they did not use Caesar cypher (the third one, with nothing written on it actually did use the caesar cypher, with the shift of one), and I lost a lot of time trying out all of the Caesar cyphers (both in English and in Croatian, which considers "dž", "lj" and "nj" one letter, because it can). In the end, they remained the only two quests solved by no one. As I found out after the game, the solution to them was actually reverse alphabet substitution... which I might have tried had I not tried every caesar cypher there is. And regular substitution cypher using the phrase as the key. And transposition cypher using the 5-width matrix and "Cezar" phrase in alphabetic order (23514) as the key... but the phrase remained untranslated. 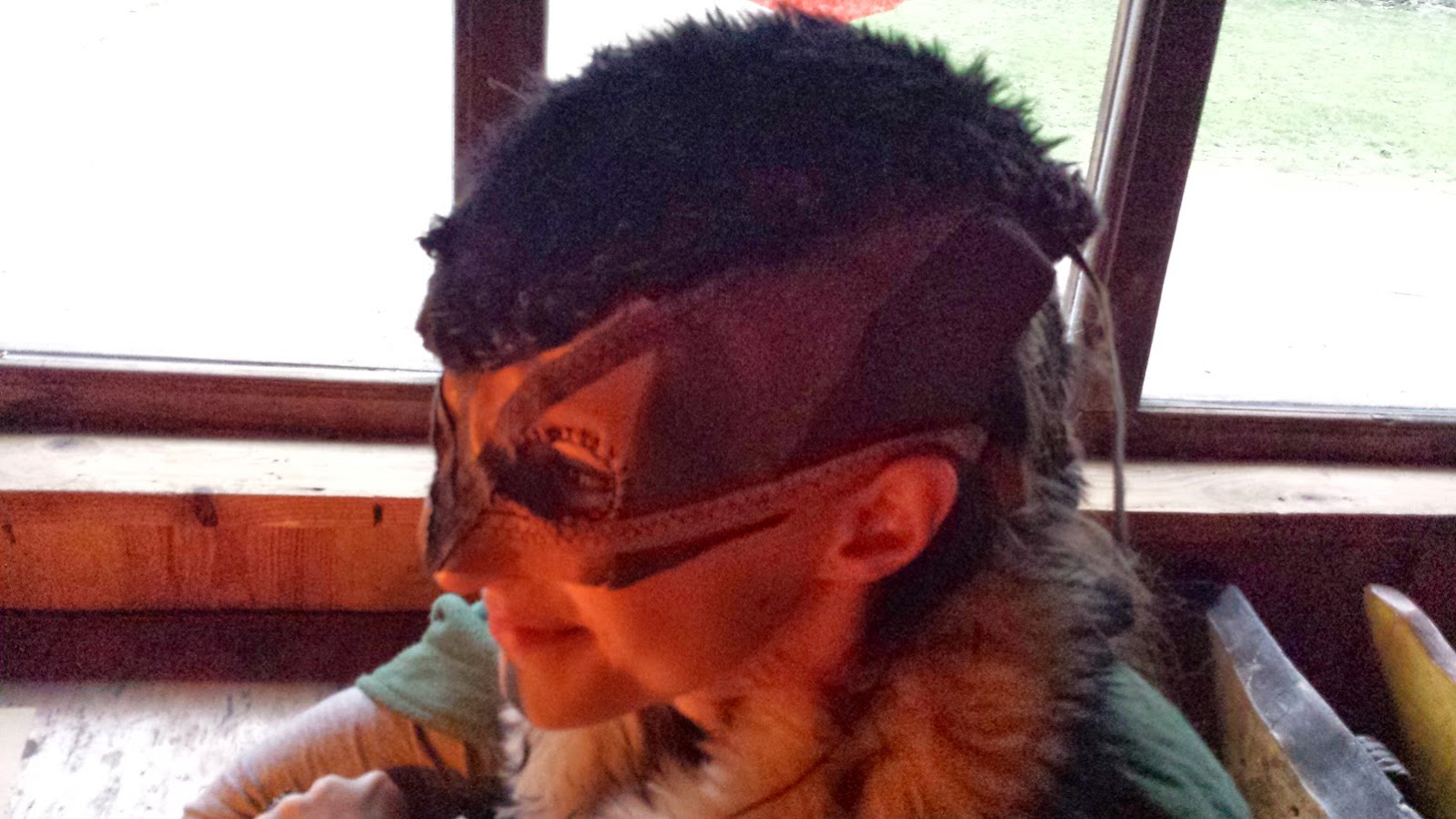 Receiving all the puzzles in the beginning, I found it difficult to role-play with others at start, because all of us were preoccupied with puzzles. But later on it became easier, as all of us slowed down. Most of the larp was the scavenger hunt, though later on there was also a ritual performed in the church - a lot of us got dreams (or something similar) about it in the personalized intro we got before the larp started.

The church - a small wooden chapel that's on the site - had a smoke machine installed into it (and operated from outside), which gave it a really spooky feeling and a new landmark in special effects. Overall, the logistics of this event were quite an effort and it showed. About that time, my mask unfortunately started to disintegrate as it soaked in sweat and broke (I should have put in another layer and reinforced it... now I know), so I made a "field repair" which ensured it would stay on for the event and never be usable again anymore. 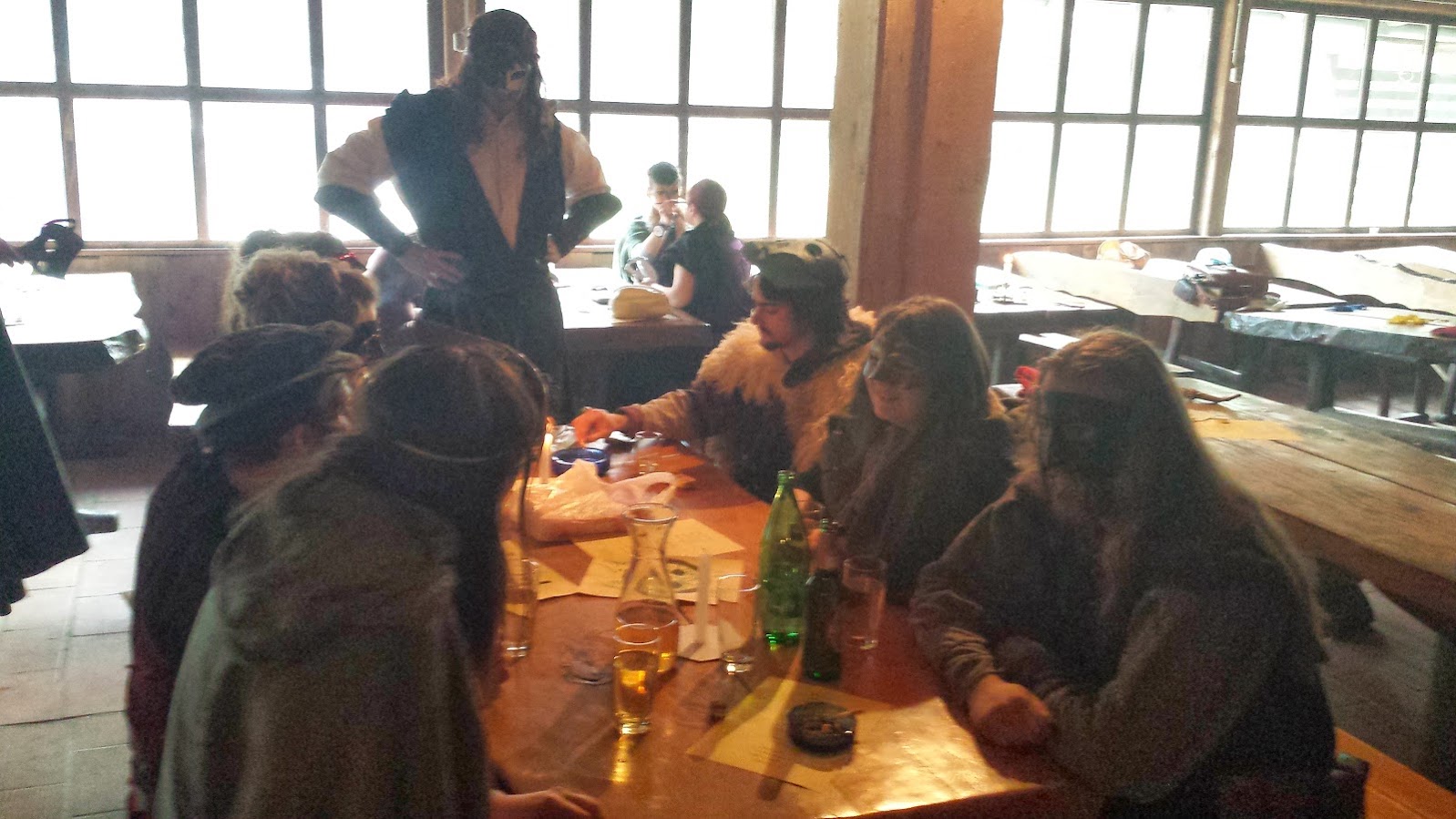 The larp started around 6 PM and ended around midnight. Before the end, the winners were proclaimed. My team and another one were tied in at 18 puzzles out of 25 max. In the end there was some mess, and a guy from the other team died. The girl from the other team was proclaimed victorious, but she was from the same faction as us - so we got the boost too.

Looking back at it, the event could've gone a bit better - if we started earlier, we'd get more of the daylight which was a somewhat limiting factor in finding the items outdoors. As I mentioned, there was a limited quantity of grilled meat which disappeared very soon (though there was goulash available). And some content was very prone (even inviting) to players messing up.

But overall? Despite the few hiccups, it was an intensive night of play (especially if you like solving things) that pushed a few things forward, with impressive logistics and nice masks and costumes all around. And it was fun. 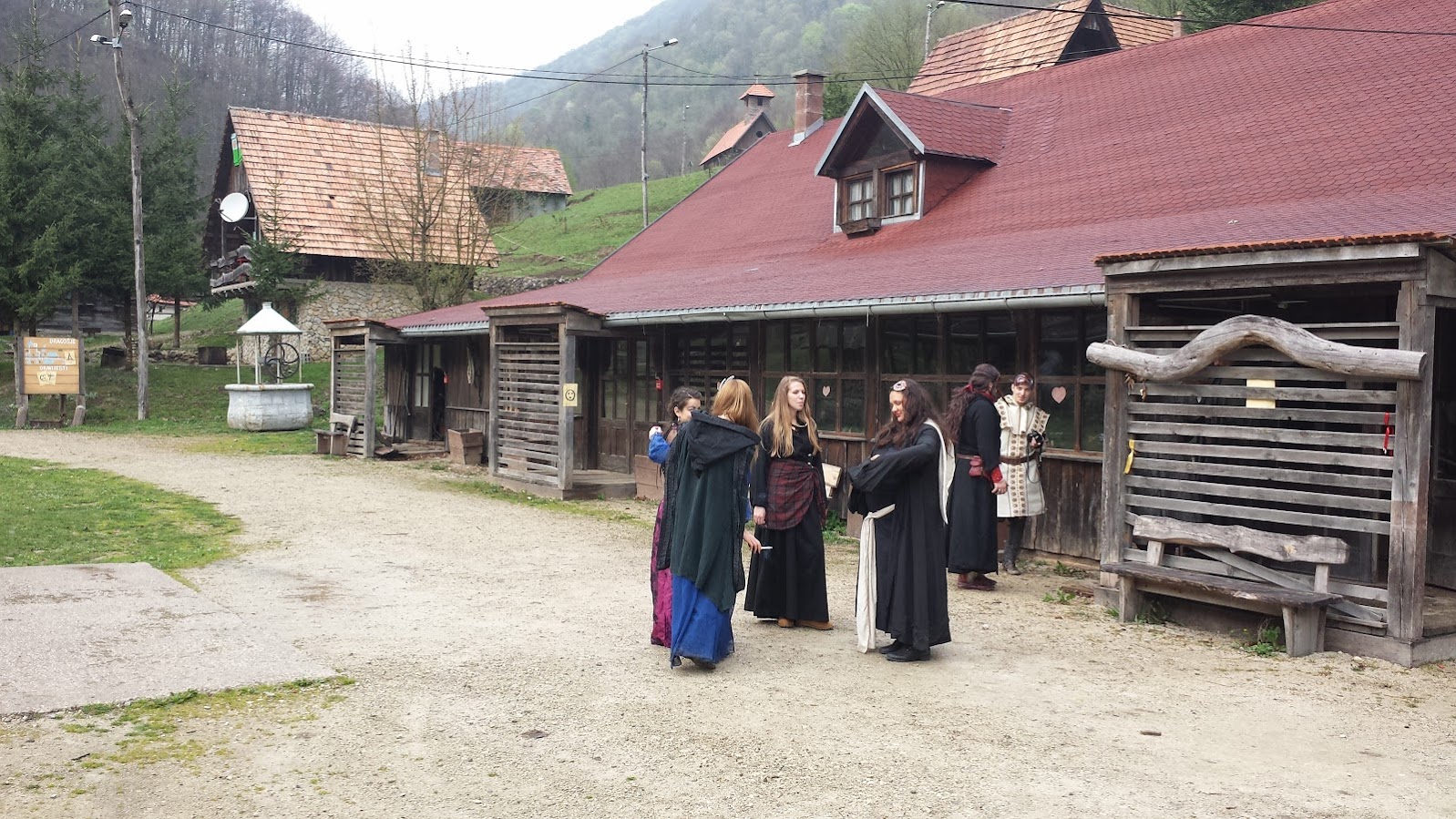