A Party Full of Secrets 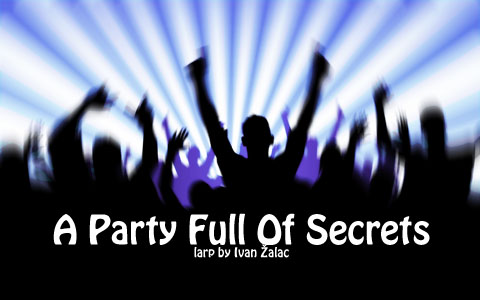 Like I did with the Death of the Japanese Emperor, here's my complete publication of A Party Full of Secrets - it's there for you to run, republish, modify, learn from or build upon as it's published under Creative Commons:

Get the English version of the larp here.


A Party Full of Secrets was run on the PoRtaL - first Croatian larp convention on March 2nd. The run has been shortened a bit from what was written due to running a bit late - only 1 connection was made with the Ball of Yarn, and the larp was shortened some 15 minutes (near the beginning) from what is written here. I did note some key songs - they are of course replacable if you believe you found a more fitting song, and the entire playlist is something you'd probably make depending on the people arriving to party...


Anyways, the run on PoRtaL was very intensive and powerful (read more about it here) - a lot of people were on Ars Amandi workshop that morning and were looking for an excuse to put it in practice. They taught the method to several other people, and it spread. Of course, the run doesn't need to look that way - it's purely up to players.

The first run was in English, so the larp is originally published in English. Expect the Croatian version - Tulum pun tajni - soon. Will there be another run? I don't know. Nothing is planned so far. If an opportunity presents itself then yes. Of course, you're free to run this larp on your own.

Read what the players said about the larp:


"This is the trashiest larp I've been to." - B.R.
"The Party was, well, very very interesting :)" - I.D.
"The Party Full of Secrets a total success, although it certainly wouldn't be so good if there was no prior Ars Amandi workshop :)" - I.D. (original in Croatian)
"The larp was also mind-blowing, a big thanks to those I could play with" - J.A.V.
"Thank you for this!" - D.K.
"WOOHOOOOOOOOOOO!" - everyone