March 10, 2013
The 64th Maksimir was different. Since time immemorial (read: the first Maksimir larp in 2007.), it was held at the western side of the fifth lake in the Maksimir park. Two years ago, the location switched to another, some 100 meters away. Today, the larp location was on the eastern side of the lake - yay for a change! :)

We found the new location, and prepared for the game to start. There were some delays as some people were late and busy armoring themselves up, and GMs wanted to start with everyone around here.

The story was a continuation of that on Maksimir 63 - true to it, it was also in a different in-character location. There was a funny looking village in front, one half of it burned.

Basically, after some chatting with the villagers the demons attacked. Apparently, some portals to Hell got opened. 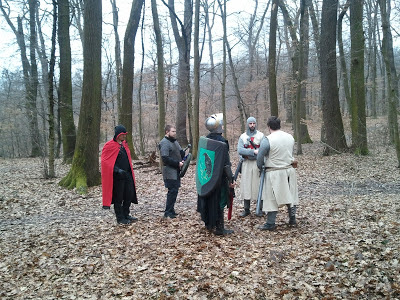 Except the demons, there was also fighting between some players. Sorting out our differences. We tracked the demons to a large hellgate.

Plenty of battle ensued, a big demon etc. The gate was closed. Rumors say there are more around. That's basically it. We packed up and went for some coffee/tea/beer.

Next Maksimir is scheduled for April 13th. Before that, there's Sunčev Kotar - an event ran by several organizers in two weeks. I had a few quite powerful role-playing moments this event with some other players, which was nice. I fought. I had fun.