The day started with goodbyes. After we fed our guests with some burek and yogurt (well, they have to get the authentic experience), our guests left. Hungarians back towards the border, and Rebecca to her family - and then off to Samobor where a reenactment battle was being held. I'd probably go there if there was no PoRtaL this weekend. Many hugs were exchanged, and after a quick shower I was back on my feet - and off to the convention.

The morning started with some hands-on stuff. Brittany and Sean, an American couple who did the SCA presentation with Rebecca yesterday, were teaching us how to make the authentic medieval stuff. At the same time, there was another acting improvisation workshop - this one by Andrej Štefan.

Brittany's presentation was "Gores and Gussets: A Practical Introduction to Medieval Pattern Making". At this point I have to say I'm not much into practical aspects of costuming - sewing or tailoring. I have very little knowledge of it for a larper. It always seemed like something very difficult, until Brittany's workshop. On this workshop we learned to do a pattern for a simple tunic or a dress, using gores and gussets - which are rarely seen on Croatian larp wardrobe, as we typically use square design and slits instead. This could be a general improvement for our fantasy larps. Which also reminds me, I don't even know the Croatian words for gores and gussets... We self-measured and got a very good view of what we should do.

Sean did the workshop about making turn shoes (or ankle boots). A very needed workshop, I'd say. Few people here know how to do it, and creating good shoes is always challenging - or is it? Well, not necessarily, it would seem. I found my mind much harder to wrap around - possibly because the entire thing was 3D and I don't have much tailoring skills. But yeah, I got a feeling I could do this. It was also slightly more hands-on, as a couple of us brought some cloth, took the pattern for our soles, and started prototyping our shoes... It was also interesting to notice that these two workshops - the only crafting workshops on the convention - drew in some people who visited nothing else...


It was lunch time again - with Marko, Brittany, Ivana and Vesna. The second Create a larp lunch. We took off to the Zlatni Medo beerhouse, which is in vicinity, and we sorted out final details about the larp. We went over all the characters - which Marko printed out and talked a lot about what we're planning to accomplish. I was amazed that so much had been done in such a short period of time. We went a bit over our lunch time slot - Vesna and I returned to the classes which were just starting again, while the rest of the group stayed for some more preparation time.


Ognjeni Mač presentation was next - kindly enough, despite starting late Ines and Tijana from the OzOI waited for us to come before starting. But then again, exact time was always something flexible on this convention. Ognjeni Mač presentation was very visual - the slides were fantasy themed and several weapons were brought for the display. The short history of the association was shown as well as the current events the association is doing - Maksimir, Jaska, various feasts, as well as the other stuff association is doing including regular meetings and workshops. Rules, classes, armor and weapons were discussed as well.


After a short break, it was my turn to do two presentations in a block. My first presentation was about Amtgard 8 ruleset, currently being actively developed. I kept this presentation quite technical, assuming that most people knew the 7.X version (which was true) to explain the key differences and new mechanics better - although some new people wandered in and got a bit confused. You can check my presentation here (in Croatian).

My second presentation was about pervasive larp in general - and the pervasive larp Izgon (Exile) that I've been preparing and which will run from March 24th to April 28th... everywhere in the world, though most content will be in Zagreb. Its site is up and sign-ups are open (until March 12th), and it's described in the presentation, but both are in Croatian at the moment. I'll write a detailed description in a day or two.


After a short break, the next thing was another discussion moderated by Ana and Božo - what does "a" in larp stand for? This discussion actually turned quite more philosophical than I thought it would, and quite reflexive. We ended up discussing what pretty much every letter of the word meant for us - though near the end it turned to the discussions about the differences between often-compared reenactment and larp. 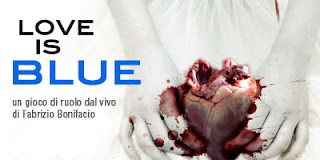 The first larp started afterwards. Love is Blue - which was so far ran by Ana and Božo, but this time it was ran by Marko. It already ran so many times that more people participated in it than in any other larp big or small in Croatia in the last 7 years. This run was recorded in full by Croatian Radio which was quite awesome.

I watched its prep and remembered when I participated in that larp on Eurocon. It seemed like ages ago. So much happened in less than a year. I took a small break to prepare Death of the Japanese Emperor. At the same time, a book presentation by Aleksandar Žiljak and Milena Benini was running - something that I missed. It continued into a panel about the synergy of larp and literature - those authors were also joined by Sanja Lovrenčić, the author of "Zmije Nikonimora" series that the larp Tragači zore was based on. The panel was run by Vesna and Ivana.

Some perspectives about larp from a novelists' standpoint were quite interesting and offering very fresh points of view - 48 hours into the convention it was quite refreshing. Too bad I only caught half of it. It seems there are a lot of possibilities.

I already noticed the number of people thinning - very few have been left on the con now. While many people circulated in this con, and the largest presentations drew in 30-40 people, it shrunk to around a third or a quarter of that number now.

The 19:00 - 21:00 time was probably the low of the entire convention - well, unless you went for The Cabin (Koliba) run which was so intensive it made both GMs (Ivana and Vesna) cry. Second run of the Love is Blue was cancelled - signed-up people didn't show up and there was nobody out there willing to play. My run of Death of the Japanese Emperor was also canceled - I didn't get enough people even with those who showed up for Love is Blue and had nothing to do now. Some people went down to KSFF where there was bar and they were playing Star Wars on TV. I stayed in the presentation room, running again my presentations of Mixing Desk of Larp and pervasive larp to 1-2 people who missed them the first time and who were willing to listen. Aleksandar dropped in for his Horror Murder Mystery, but not enough people wanted to play it. We watched and read stuff about The Monitor Celestra - they were having their first run around that time. My hopes for the evening mystery larp sunk - I already asked some people to join us if original players failed to show up...


However, in the end we got pleasantly surprised - they did show up, all of them. We revealed the name of the mystery larp - (Re)union - and went to run it, again pressed with time... Five GMs, ten players. Second largest larp on the convention, and the last thing that will happen on PoRtaL.

The larp started - I was to play a calm, dry butler. A very challenging role, not something I usually play, but it was an excellent experience. I can't give much details about the story as it's easily spoiled and a rerun of this larp is quite possible, but it was an intensive experience for most. Us GMs were not quite satisfied with how we planned it to go - we found ourselves sometimes pushing more than we intended to, as the time frame was shorter than planned - but the players were quite satisfied in the end (wonderful results for the 48 hour design process!), the larp ended during its high peak (similar to Death of the Japanese Emperor) and it ended on the very high note. As well as the convention itself.

We continued talking about those larps even when we had to leave the rooms. Outside. And then we said our goodbyes to each other. And so the convention ended, leaving many pleasant memories.

We're so doing this again.