More about Chronicles of Demgard and Carmen larp

The development of the upcoming Carmen distant-future Sci-Fi larp is coming along nicely. The early logo version has been revealed, as well as the early version of the rulebook (in Croatian only). It lists skills, items, game mechanics and it's written as much as possible from the in-character perspective as a welcome brochure, giving away some flavor of the game in 17 A5 pages. One interesting mechanic: any in-game items you bring (including weapons and energy shields, but not armor) are considered stealable in game unless you "biochip" them (you have 2 or more biochips available). 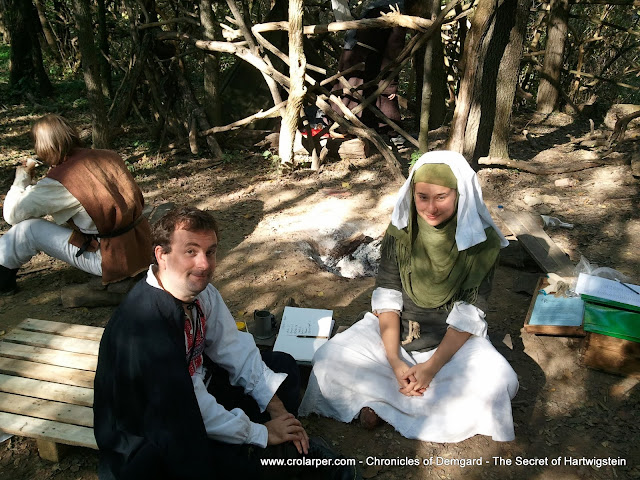 Apart from Carmen, Chronicles of Demgard is still getting actively discussed. I might have written my review a bit too early. It's only yesterday that I actually heard the full story (which not everyone found out in game), and suddenly everything clicked into place and made sense and I have to say that this ranks among the best and most complex larp stories I've experienced as a player.

Two more reviews popped up - Ashi's explains a lot of the background story, but it's in Hungarian. Another review which popped up is Kildar's organizer's review (in English), which I'm re-posting here under permission.

On the 20-21st of October 2012 we organized a so far unique episode of the Chronicles of Demgard LARP campaign - one which was “internationalized” to easily allow players from other countries who don’t speak Hungarian to partake in the event. The idea came to me after Terra Nova 2012, to invite the people we got to know there to one of our own events, but that needed a lot of additional preparation - translating the game rules into English is one thing, writing up a brief guide to the game world is another. To make things more efficient, I also did a rulebook update at the same time - based on the experience of the last summer event - especially around the magic system’s flaws. I’d like to thank Jávorszky Ágnes Viktória (a.k.a. Armis) now for her help in proofreading and grammar correction. (Also, she would like to apologize if some mistakes were left unnoticed.)


The preparations for the game went smoothly - we got the neccessary permits from the authorities regarding the game location, we rebuilt some on-site buildings to suit the planned ingame location better, and made all neccessary information for playing available online.

My biggest worries were those problems which plagued every LARP this year: way too many cancellations and delays. Although almost a hundred players expressed their interest in such a game, only 48 people managed to sign up, and 13 of that cancelled later - additional three people just simply failed to show up without saying a word, and even 6 from that 13 cancelled on the morning of the event’s day. A lot of people were late with the arrival too - although the start was planned for 11 AM, at half past noon we were still waiting for some people to get ready. This is what makes me lose my motivation for organizing events the most: the way that people think of deadlines as loose guidelines and “Maybe after the deadline I should start thinking about it”s. This is not cool. I’m kindly asking everyone to think this over, because this is a thing which is getting a more and more serious issue with every event.

After we were through with registering everyone, we could start with a short briefing, answering questions and such, another problem came: The core rulebook fits on six a4 pages. There is simply no excuse for not knowing its essential parts - especially the signals, which are not that complicated.
The gameplay itself went well, we had a lot of great moments and gained a lot of new interesting or fun stories to tell later - there weren’t any serious problems, and the experimental “information envelope” has proven itself to be a useful addition to the game - for those who weren’t there, this meant that some players received sealed envelopes with a “Trigger condition” like “Open when you see symbol X” or “Open when X happens” written on them. If the trigger condition is met, the player has to open it and read its contents - it can be either some kind of vision, or a feeling, or something which happens when the character is out of sight of others, or even the character remembering something about the thing which triggered the envelope. 12 players out of 32 received such envelopes, and only two didn’t get triggered - all of them found it to be an interesting and useful method.

The first few hours of the game were considered a little slow, they went mostly with playing the life in the village, and everyone was trying to find out the motivations of the other characters. All changed when night fell and the daemon (played by Donát Raáb, a.k.a. “Ashi”) showed itself - I think we managed to build up a nice tense atmosphere with a lot of in-character drama and pressure on the characters.

Playing in English didn’t seem to cause any problem neither for the players nor the organizers, even although there were only two players from other countries - Ivan Žalac and Miroslav Wranka, both from Croatia - contrary to the expected ~20 (this felt like a letdown for a while, but the game itself turned out to be good nevertheless). Although using English was not mandatory, everyone tried using it when any of them were nearby.

The feedback after the game was certainly positive, although there is still a lot of room for improvement. I purposefully left out the ingame story of the event, because I’d like to write it from an in-world point of view later.

Anyways, everyone, thanks for playing, and thanks for all the work you put into making Demgard feel alive!
~Sándor Mesterházi a.k.a. “Kildar”