It's one of those larps where I'm not sure where to start. There's many things to write about, I'm not sure where to begin. Perhaps from the beginning, which was some two years ago when Ana Rajner and Božo Špoljarić decided to make this larp. It was then organized, scheduled and re-scheduled several times until it was finally scheduled on this weekend as the first larp of the newly founded Lateralus association.

A one-shot fantasy larp hasn't been done before in Croatia. After some talk with Croatian fantasy autors to secure rights to use elements from their books in larp, Tragači zore (Seekers of the Dawn) was slowly being formed, planning to be a very different style of fantasy larp than what is usually played in Croatia.

One huge difference is how the game was written and ran. Unlike other Croatian fantasy larps, story of Tragači zore would be very personal for each character. Detailed character descriptions were sent to GMs, and they started working on combining them, adding details and writing personal quests.

By "adding details", I mean a lot of characters had "insert character X here" where it would fit in their own history (or potential future), and plenty of connections were made in that way. Everyone was interconnected in some way. 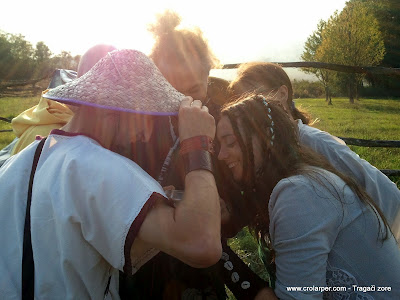 Most other Croatian larps have a main plotline, allowing players to "latch on" it and roleplay. Not here. Main plotline was merely a background, and a total of 180 personal quests was written for a total of 38 players (yup, you got that right - 180 quests). 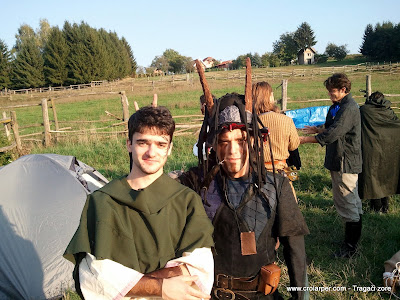 But I'm getting ahead of myself. Not all of it was rosey. The event faced plenty of challenges and issues before it started, and I'm not talking about all the rescheduling it had. First, organizers couldn't find the terrain they wanted and in the end they chose Majčin Gaj terrain in Lubena. Second, the cancellation wave hit Tragači zore hard - lots of players cancelled for various reasons, including Sanja Lovrenčić who wrote the "Zmije Nikonimora" series which served as the main basis for the game world. Third, organizers seriously underestimated the huge amount of work they set for themselves. 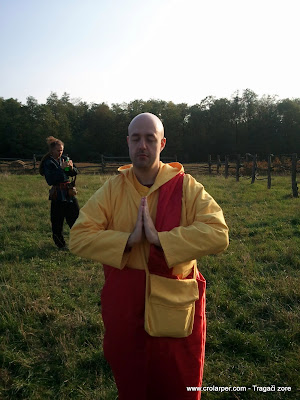 Despite that, Tragači zore would still start - with tired and sleep-deprived organizers who were setting things up and writing quests until last minute. Us players set up a camp (few would sleep, as it was a night larp - mostly as shelter for stuff), fooled around, took photos etc. Camp was to be off-game space and meta-space. Unlike other larps who were camp-based, camp would not exist in-game as such. We were all to play travellers who came from afar after a long journey. There was plenty of nice in-character travel gear visible, such as period knapsacks and similar.

There was an intro speech before the start, explaining freeform nature of this larp (most other larps have rulebooks, this one was freeform), safe words and code words used in game (meta, brake, cut) which were done in a nordic larp tradition. The method of going in-game would be when we would remove our cars from the terrain and approach the forested part from any direction we liked. The forest was the mythical Forest of Whispers, where apparently wishes became true. I played a character called Nikto, a healer and herbalist from the White City in Yalma who had quite a scarred past and was kind of passive aggressive. 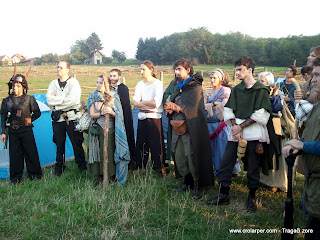 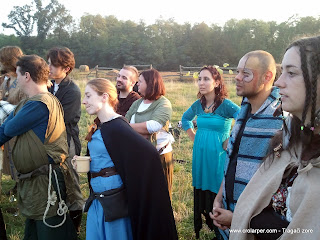 I could roughly divide the structure of the game in three different parts or acts:

Travelers arrived to the forest, only to find a weird couple who lived at the forest's edge, telling them it's not really the Forest of Whispers. They discover each other, find out some know each other from the past, explore the (empty) forest, and decide to spend the night there.

The weird couple turn out to be the supernatural Forest Guardians. They promise the characters they would help them fulfill their wishes, if characters do things for the forest instead, and sacrifice something of their own. Should they fail, they'd become just one of the whispers in the forest.

Players have (or have not) completed their tasks for the forest, and now they would have to follow the clues to construct an altar in a proper way, and perform the ritual of sacrifice at the dawn to seal the deal with the Forest Guardians.

The first part was sort of slow and low-intensity. When Guardians appeared, everything went nuts. People were over, completely buzzing around and trying to solve what Guardians asked them to do. Remember those 180 quests? Yup, that's when they were trying to solve them. Pretty much every quest was about interaction with another characters. A lot of questions from their backgrounds were solved then. Or shown possible solutions. Seeing such fast-changing web of relations and interactions settle into place was very impressive and engaging. I finished my tasks soon, which was most due to me being in the right place at the right time in the first part to see and hear certain stuff about other characters, and then I role-played with others.

It slowed down on the third part. It was a bit too much for many first-timers (and there were many of them), and the non-sleeping took its toll on Božo who fell asleep. I also took a short nap (fully in character, mind you! :)). After agreeing on how to proceed next with Ana, we all went out of character for about two hours (which was rare otherwise, it needs to be said) and made some coffee to gather strength for the dawn ritual (the process for constructing an altar was a bit sped up).

Božo awoke for the ritual, and once it started it was all awesome again. Let's just put it this way. I've seen better larp rituals done - but not in Croatia. It was detailed, very well done, touching and very meaningful for our characters and it was basically the closing of the event. We sacrificed something meaningful for our characters, and the Forest of Whispers helped us in return.

Then it was time for coffee, debriefing and talk about everything. Which was pretty fun. Considering this was a one-shot larp and characters would not be reused, we had no reasons for further secrecy and shared our history, given tasks, and looking how everything was connected together. 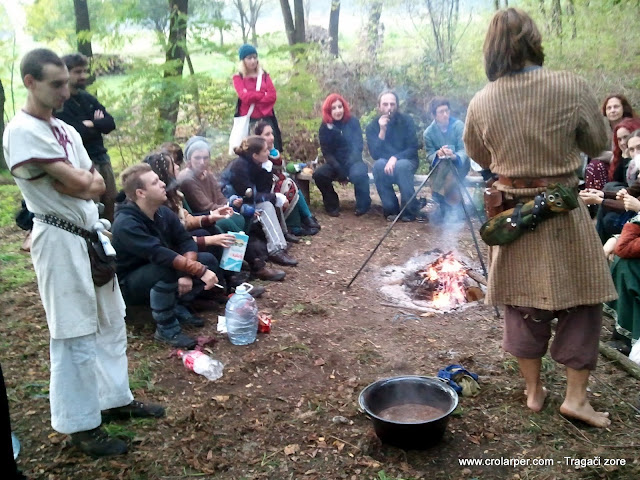 Seeing people who built costumes just for this larp was awesome, and actually several of those costumes were looking quite impressive for first timers (and there were a lot of first time larpers). I found people of Letinen especially interesting, as a lot of them were wearing feathers, which are otherwise very uncommon on Croatian larps.

Nearly half of the event was new players who never larped before. There were some issues, but overall I'd say a lot of them did very good for first time larpers. Tragači zore also had the highest female-to-male ratio I've ever seen on a Croatian larp.

It also had pretty much no fighting. There was a brawl at the start which was resolved fast by several of us pulling the combatants away from each other. There was one killing which was in fact "assisted harakiri". There was some more trouble planned but ultimately the choice was on players, and they chose the more peaceful route. There was no heavy combat planned or done on this larp. 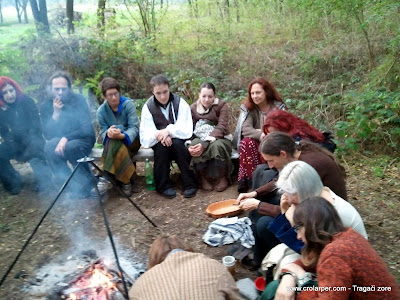 So, the final verdict - with all the good and bad stuff happening, was the first larp of the Lateralus association good or bad? Without a doubt, I'd say it was excellent. Despite some failings, Tragači zore have plenty of "we did this in Croatia for the first time", and most of that really worked well. It was also the second largest Croatian larp of the year, after Crolarp (number of players getting past the Rajski Vrhovi's 35) and the one which got the most new players in game. I cannot help but wonder how would it be like if Ana and Božo managed to do all they planned to do in a way they planned, and I believe this was a strong and positive learning experience - for both GMs and players.

I would definitely come again to a similar larp and would recommend it to my friends (and readers).