Rikon report. Carmen SF larp in the works! News and some poker.

The sci-fi conventions in Croatia function like central meeting points of Croatian SF, Fantasy and roleplaying fandom. This is visible even in smaller conventions like Rikon. They had no big-name guests (Eurocon and Liburnicon had them) but still the people came and had fun on various lectures, presentations, games and demos, or just hanging around with people.

The new campus building - to which Rikon relocated last year, from what I've heard - is quite neat, and is probably the best looking convention space in Croatia. It was a bit underutilized, as there were several holes in schedule where a classroom was empty, and despite there being a lot of people, a few more would fit too.

After Jaska 11 was canceled, I had a weekend off so I scheduled to go on a show with Red Srebrnog Zmaja on Friday. However, that show got canceled too. So around 2 PM on Friday I decided to go to Rikon with my wife and kid.

We would spend the night in our apartment in Klenovica, some 50 km away from Rijeka. Since Damjan was tired, I left him and Jasminka in Klenovica that evening for a night of sleep and went to Rikon from there. I arrived at 10 PM, hurrying up to the room named Gondor where Sven was hopefully still holding a Steampunk larp presentation. And he still was - the schedule which was not fully filled allowed for some classes to extend a bit beyond their time slot, and Steampunk larp Para pokreće svijet was still discussed. 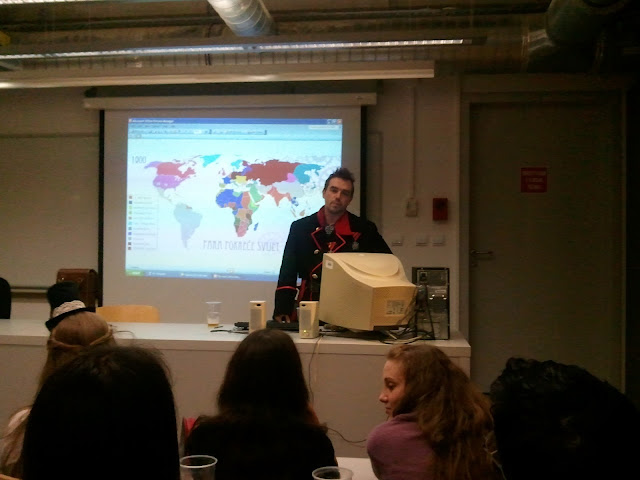 Despite arriving at the end, it was still interesting. Apparently, locals liked the idea of a steampunk larp a lot. A possible steampunk larp in Fužine was discussed, connected in some way with Para pokreće svijet. But the biggest announcement came at the end.

The SF larp called Carmen was announced. It may be held this year (if the organizers, Watashi and Sven, manage to prepare it in time). It will be an indoor space opera larp, based on the space station Carmen in the distant future when the stars are dying and more technology has been forgotten than is currently known. Earth is just the ruins of a long-gone empire that was spread around the galaxy. The Carmen station is a center for life extension ran by a ruthless but fair artificial intelligence, and it has been abandoned for a long time... Larp is planned to start a bit generic (any space trope can fit into it), but get upgraded and better defined over time with organizations, corporations, nations, planets, aliens, starships etc. as games are played (it will be a campaign larp, not one-shot).

A software is being written for different parts of a space station, and if you have any old computer hardware, parts or other electronics which you can donate (there's a reasonable possibility it will get ruined during game) contact Watashi. So far it sounds quite interesting. The game will use nerf weapons (or nerf clones) for your lasers, blasters, phasers and whatever.

Rikon was also missing no medieval/fantasy costumes. Many of them visually inspired by Game of Thrones show - Game of Thrones board game was also commonly played both days, as well as Pathfinder and some TCGs. The reenactment/living history group from Rijeka, Ordo Sancti Viti also made a large appearance and actually did quite a lot of presentations and workshops. 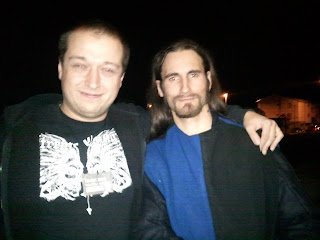 I spent the rest of the night mostly meeting people and catching up with everyone I knew from before. I arrived the next day with Jasminka and Damjan, and we got into "Poker for ladies and gentlemen" by Ivana and Vesna which was quite fun. It was organized as a lightweight poker larp, with everyone on the table being in-character. The setting was steampunkish and Austro-Hungarian, so the three of us - Sven, Jasminka and me - decided to go in as our Para pokreće svijet characters - general Somogyi, Mimi and René. We also had a time traveller and The Crow with us. With the con-nature of this mini-larp, we were excused for not all of us having proper costumes. 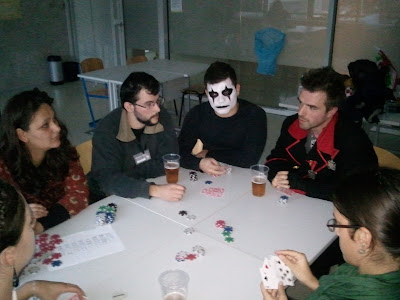 We had a lot of fun roleplay going on. Mimi (Jasminka) eventually won the most money (in the time slot we had) and won the game. After that, I was catching up with people again and I found some interesting news.

Rebecca from SCA was there. If you remember, they planned a SCA event in Croatia a month ago, but it got postponed until spring (due to reasons of both personal and technical nature). It seems plans are in motion to make it happen sometime late April 2013.

I've heard the news that the guy who owned Motovun Ranch while Motovun larps have been held has passed away couple of months ago due to a stroke. May he rest in peace. On a more positive note, it seems that there's still some life in the larp scene of Pazin and Motovun - apparently there's a new generation of players interested in restarting larp in that region, and looks like they're doing some stuff over there already. Will it take hold? Will they invite us over there again? Will they come visit our larps? Will they restart the Amtgard chapter of Histria or do it some other way? It remains to be seen, but it would be great to see the larp scene there return to its former glory.

Our son was tired so we had to leave early. But it was a great convention, and I certainly hope to return next year...