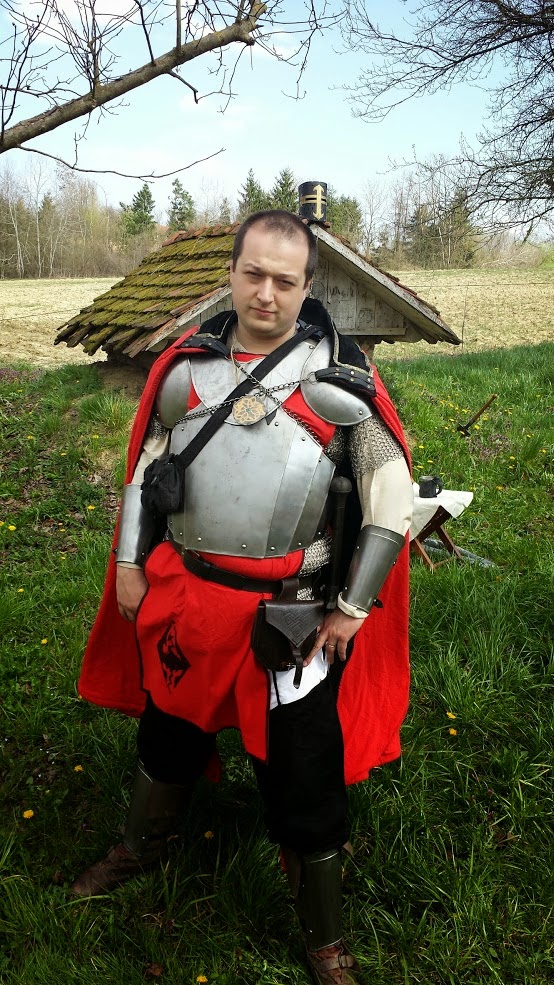 This weekend the first chapter of The Elder Scrolls Chronicles larp (a fanmade, unofficial Elder Scrolls larp) was played. Although in reality it was the second larp of the series - the first one was the playtest that was organized last August, but which was also a fully-featured larp. This one was much bigger in terms of population though - 49 players plus 5 organizers - and also, from what I noticed, one of the most hyped larps ever.

The hype and player excitement was the cause of really massive preparations for this larp - both by players and organizers. The event's entrance fee was 50 kn - which, I suspect, was nowhere nearly enough to cover its' cost, as it also included two meals (roast pig and a bean stew, and plenty of bread with it), and a lot of drinks, all available for in-game money. Under such circumstances, I imagine the realistic price of the event was at least 50% more of what we paid, purely to cover all the costs. Plus, the organizers put in a lot of time, and even with five of them the amount of work was massive.

As a result of the player preparations, the costuming was amazing - both with old and new costumes. While the last year's Terra Nova: Rise of Rashalan certainly raised the bar, TESC1 certainly kept up and left nothing to be desired - its' costumes of high quality, and many of them directly recognizable from The Elder Scrolls video game series (especially: Thalmor and the Priesthood of Dibella). It was a huge improvement from the playtest, and it helped to make the larp's world truly feel like a part of the Elder Scrolls universe, and for the duration of play our playing grounds was a believable part of Skyrim.


Intro speech before the event started - also showcasing all the costumes

The storyline resembled the playtest event. It was played in 4E 182 (compared to playtest's 4E 180), and there were many similar plotline elements - a pre-Stormcloak rebellion conflict between the local Nords and Imperial Legion, priesthood, a skooma dealer chain, and a situation where all players were removed from the regular world to some other place, and this had to be resolved in some way - in playtest it was Sheogorath transporting us to the Shivering Isles, here it was a careless reading of an Elder Scroll which dislodged us all from the regular time.

However, with over twice the number of people who were on playtest, this event was much more lively. There were several new factions: the Thalmor, East Empire Trading Company and the Reveler Caravan. I played a local Imperial Legion captain - I was supposed to be second in command, but the original captain had to cancel due to unexpected work obligations. He made some awesome gear for this larp too, which he lent others - I got to wear his awesome cloak, and another guardsman got to wear the rest of his gear. Several more people canceled too, but (due to maximum number of people) most of them were replaced by the people from the waiting list - a mechanism which made larp's structure of interconnected storylines much more robust.

Playing the Legion captain was one of the most challenging roles I've ever done. It was a very busy task - delegating tasks to the soldiers, upholding the Imperial law, protecting the Thalmor, performing investigations etc. - it was being a law enforcement soldier, a soldier, judge, jury, and a diplomat in the name of the Empire all at once. Plus, dropping a few guard dialogue lines from the game every now and then. I did my best to do a decent portrayal of both a Legion officer and the Legion morality and viewpoints. 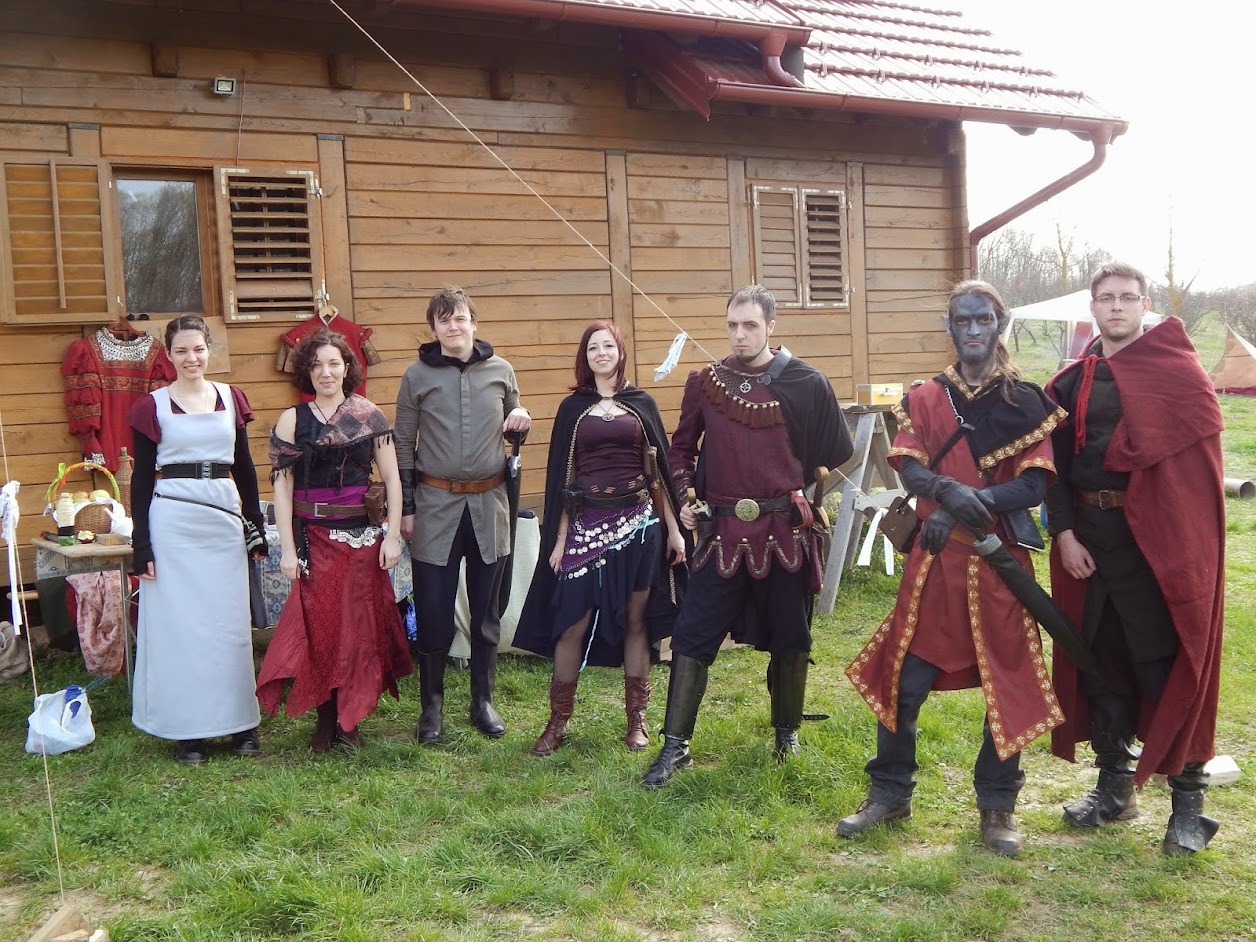 The plot of the larp didn't rely on the NPCs a lot and it was driven by players - all players got their main faction quests, optional faction quests and personal quests to fulfill. Or perhaps the more appropriate word would be "goals". Influences from several other larps were visible (from Tragači zore, Chronicles of Demgard, Terra Nova and a few others), but the mix was very refined - together with Elder Scrolls lore - into a thing of its' own. And it worked well.

Of course, there were a few problems - as in any larp. But in general most of the things went smooth. The larp started some three hours later than it was supposed to. There were some unexpected developments that had to be undone for the sake of the story. And there was no debriefing that was planned, mostly due to the rain that started on Sunday (it will be performed online). And some of the players were unconvincing in their portrayal of characters from Nirn, which irked me a bit as a lore buff (though they were in a minority, and a lot of players - despite not knowing any lore beforehand - took a lot of time researching it for this larp only and they managed to portray the characters they played very well). 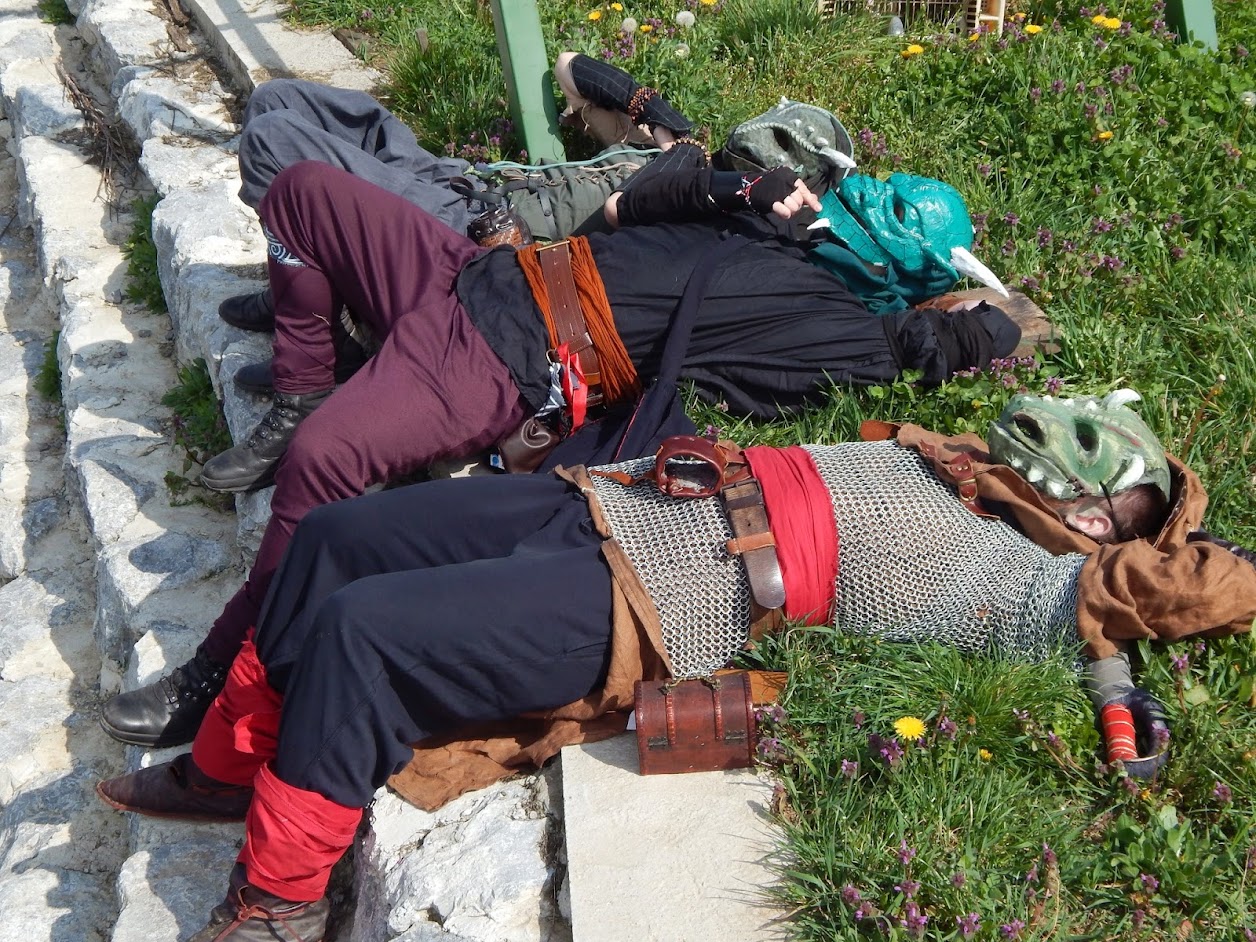 The total playtime of this larp was from the 14:00 when it started to midnight (when parties started), although officially in-game time was until 10:00 on Sunday, though a lot of people went off-game after midnight when the parties started. The parties were awesome. Guitars, both in-game and out-of-game songs (some written for this larp), dancers and plenty of drink which included some homebrew mead (from three different players, myself included) and many more things ensured that there were in fact at least three different night-time parties Saturday evening: one in the tavern, one by the blacksmith's fire, and a small candlelight gathering in Dibella's temple. Friday evening was also wild from what I hear, but I couldn't arrive then due to work obligations (Friday was an off-day, so I didn't miss in-game stuff).

Yes, this was sung in-game

This larp took a lot out of me - emotionally and physically - and I feel drained, but very satisfied. Both with the larp itself and my portrayal of the character. My only regret is that I didn't have enough time to have a meaningful interaction with a lot of other characters. 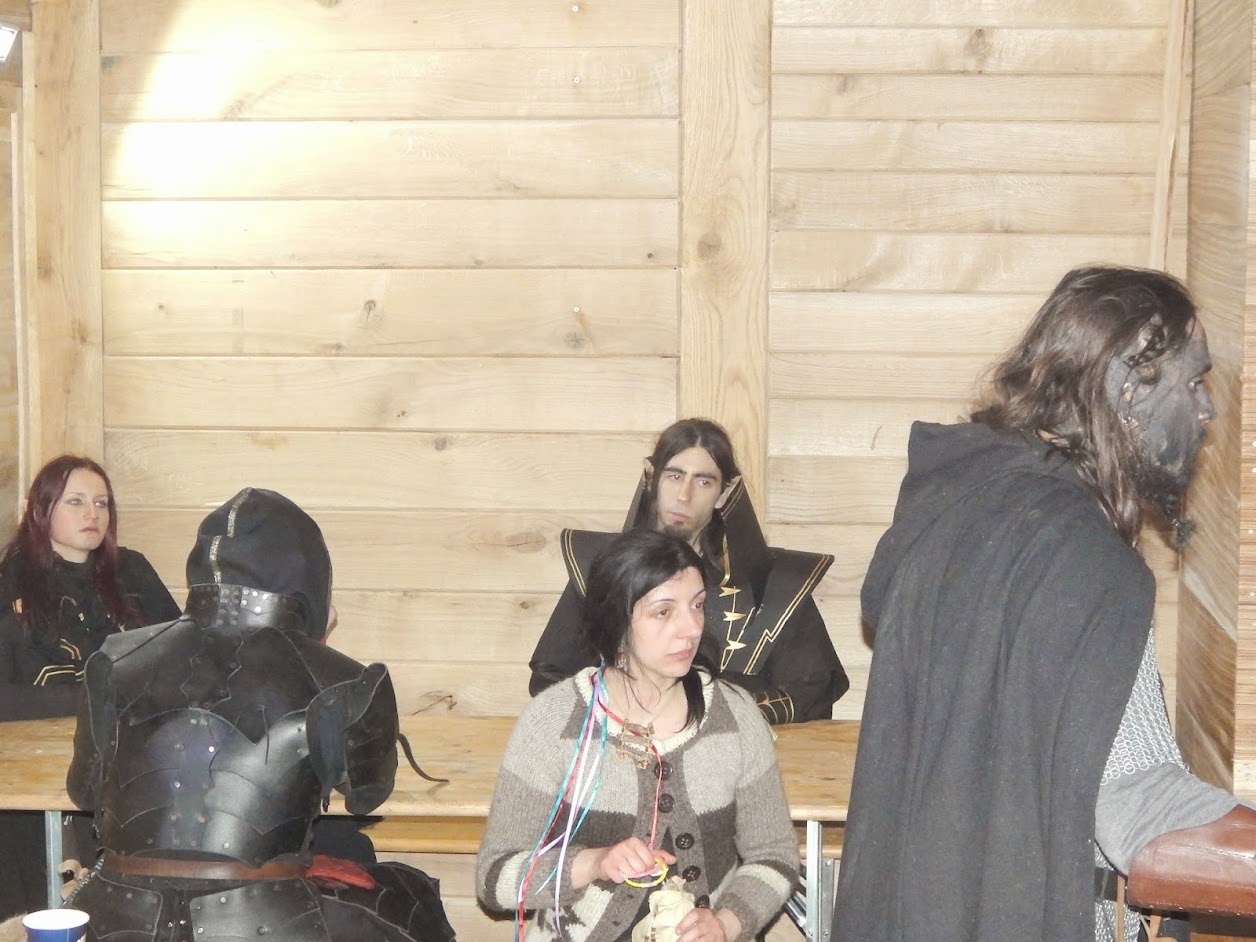 The weather was unusually warm for March and - up to the point where it started to rain - it was nice and sunny, but there was some very strong wind which spelled some trouble for several tents and items in Dibella's temple. And there were more tents than before - unlike in playtest, there was an out-of-character area where modern tents were allowed (also, the chemical toilet was placed there). The nights were so warm, it almost felt like summer.

Final verdict? The hype was certainly worth it. This larp was amazing, I had a lot of fun and immersion. It was the larp that I wanted to play and it had nearly everything that I want or expect out of a fantasy larp. In the last 3 years, there were a few larps which could be considered historical landmarks in the Croatian larp scene, and this was certainly one of them - a place well earned. Big thanks to the organizers (Marko, Klara, Matija, Mirna and Domagoj), tavern staff and players who made it all possible. The next event is rumored to be in August - in different place (both IC and OOC) and different era. More info will be available on website and Facebook group (as well as on this blog) once the time is right. I'm looking forward to it.